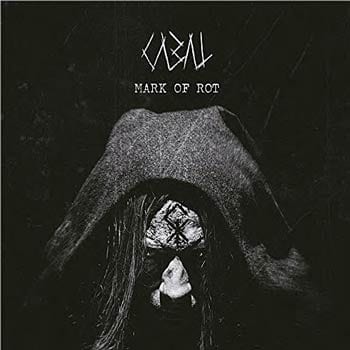 DJENTLEMANLY DEATHCORE: Denmark’s Cabal is one of those capital letter heavy bands that plays dark music. Mark of Rot, the quintet’s debut album, offers a singularly moody incarnation of djent-rified deathcore. The obvious touchstones are Thy Art Is Murder—speaking of which, CJ McMahon guests on “Nothingness”—The Acacia Strain, et al. While guitarists Arsalan Sakhi and Chris Kreutzfeldt do a great job varying textures and adding spooky dissonance to the riffage, vocalist Andreas Bjulver Paarup steals the creep show. Within each song, his genre defying range leaves a lasting impression. Middle and high range rasps are especially appreciated between slabs of aural concrete. Then he goes and adds hardcore yells to “Whispers,” a late album highlight that helps maintain interest as Mark of Rot begins to blur toward the end. In terms of variation, the cinematic intro to “Rah’Ru” may as well come from a Nile album and evolves into a symphonic sound Cabal would do well to further exploit. Then again, the brooding mid album piece “Empty” falls flat on its face into the otherwise fine but not dynamic enough after a track like that “Unworthy.” And then there are the hopelessly hopeless lyrics. Well, you can’t blame Cabal for the subgenre’s dogmatic despair and misplaced misanthropy, and there are far more egregious musical sins on the books than Mark of Rot. In fact, it’s good. Really good for an debut album, actually. ~ Nick DeMarino