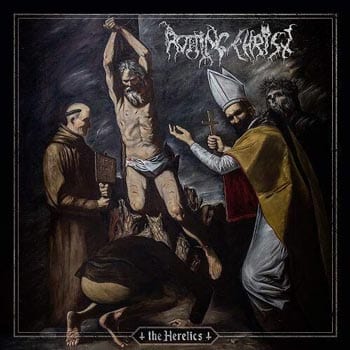 BLACK METAL INSTITUTION:One could argue that no band’s entire career matters, that their creative success and fan devotion are due primarily to a small selection of a lengthy discography. Then again, there are also those bands that remain remarkably consistent for decades, making new fans just as often as they retain old ones with strong, exciting new output.Rotting Christ belongs among this latter category, as evidenced by the insanely strong material presented here on the band’s 13th full-length, The Heretics. Thirteen definitely isn’t an unlucky number for this venerable Greek black metal institution, as this album continues Rotting Christ’s solid gold track record with a collection of excellent and memorable blasphemy anthems. It may not be cool to say that such intentionally dark music should bring such a smile to this writer’s face, but honestly? It’s a great day whenever new Rotting Christ music crosses my desk. The Heretics benefits greatly from a Fascination Street production job that retains all of the Greek band’s trademarked heaviness, while also ensuring that the guitar melodies cut across the morbid riffing of main man Sakis Tolis. The band, alongside countrymen Septic Flesh and Varathron, helped pioneered what became known as the Greek Black Metal Sound throughout the 90s, and they’ve never really strayed the course in this respect.There may have been some softer flirtations with gothic sounds on albums like Sleep of the Angels and A Dead Poem, but even those albums represented Rotting Christ quite well for the metallic climate of the day. The Heretics continues more in the vein of the heavy, modern direction presented on the excellent Aealo from 2010, perhaps even exceeding that album with an incredibly strong and dedicated sense of purpose. In particular, the lead guitar work, which was always top-notch on Rotting Christ albums anyway, steals the show, hammering home songs with an almost cinematic vibe of black metal majesty. Female vocals are used now and then to great effect, as well, while the album as a whole never really slows or becomes bogged down. Instead, The Heretics is one early bright spot on the 2019 heavy metal landscape, proof that sometimes there are those rare occasions when a band’s whole career just fucking kills. ~ George Pacheco