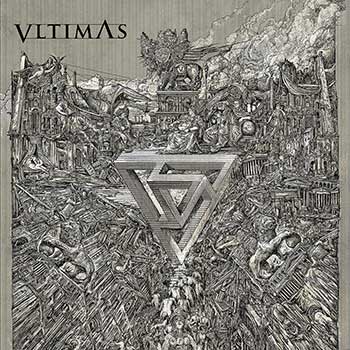 VLTIMAS
Something Wicked Marches In

BLACKENED DEATH METAL: Vltimas are not here to play nice. Comprised of Aura Noir/ex-Mayhem guitarist Rune “Blasphemer” Eriksen, Cryptopsy drummer Flo Mounier, and ex-Morbid Angel vocalist David Vincent, their extreme metal pedigree is high, and every member has entered into this new project with the desire to wreak serious damage. From the moment the ugly, jagged stabs that herald the commencement of the opening title track erupt from the speakers, it’s clear that they have destruction in mind, and they don’t take their foot off your throat at any juncture over the nine tracks comprising the record. It’s not easy to make music that is as ugly as it is catchy, but Vltimas have definitively found the boundary at which these two can coexist, and as ruthless as it gets, it sticks in the head. The likes of “Praevalidus” and “Truth and Consequence” have a litheness to them as they go about laying waste to that which gets too close to them, while “Everlasting” has an energy to it that is humbling. On a couple of occasions they enter into seriously epic territory and do so with great style. The first of these is “Monolilith,” which starts off huge and only gets bigger from there, and briefly features a near-operatic vocal. The second is “Last Ones Alive Win Nothing,” which is built on a crushing midtempo groove and boasts a mighty portentous feel the whole way through. Taken altogether this makes for a mostly riveting collection that maybe is not the most original thing you will hear in 2019, but who needs originality when it hurts this good? ~ Dan Slessor