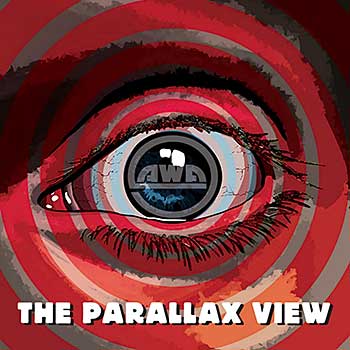 SOMETHING NEW WITH SYNTH: There is a ridiculous amount of retro inspired synth based and synthwave artists out there, perhaps too many to count, but the cream does rise to the top.

Case in point? LAWA, and their latest effort for the always reliable Cineploit Records, The Parallax View. The album takes its name from the classic paranoid political thriller from the 1970s and dives head first into some classic movie themes from the world of international genre cinema. LAWA itself is an acronym for its two members, Leonard Alain and Wank Alex, who have recorded musical tributes to specific composers in the past, such as Riz Ortolani, but this album stretches things a bit and runs the gamut with regards to style.

Sci-fi, giallo, horror, action, and good ol’ exploitation films all get the LAWA treatment here, which means that they get sliced, diced, and put into a pot of gooey synth excellence. They then emerge with fresh arrangements by Alain and Wank, giving them a taste that still evokes memories of their original cinematic flavor but with a bright spice that’s flavored by the duo’s seemingly boundless creativity.

The opening cut from Sergio Martino’s film 2019: After the Fall of New York retains that catchy, brassy refrain from composers Guido and Maurizio de Angelis, but LAWA makes it sound thicker and creepier. Yours truly actually wasn’t familiar with Jacques Revaux’s score to the 80s action flick Asphalt Warriors, but LAWA’s take on the hard driving theme makes me want to investigate further, while their chopping up of Ennio Morricone’s Revolver and Alessandro Alessandroni’s Killer Nun sound suitably twisted and unsettling.

Speaking of twisted, their post-punk PiL take on the 1976 giallo Plot of Fear is all fuzz, blown out speakers, and fucking glory, while their version of Nico Catanese’s Satan’s Baby Doll retains all of the original’s softcore Euro sleaze. There’s one original cut on here, the title track, and although the cover material is certainly appreciated, LAWA’s creative skill certainly demands a full-length of new material. “The Parallax View” is tense and anxiety inducing with driving percussion that one imagines is trying to replicate the film’s obscene paranoia. It kills.

Cineploit has made a its mark for a while now as a label with one of the most trustworthy roster of artists out there. You’re likely to strike gold even if you’ve never heard of the artist in question. That’s definitely the case here for anyone out there who hasn’t yet checked out anything from LAWA. Consider this one with a very high recommendation. ~ George Pacheco