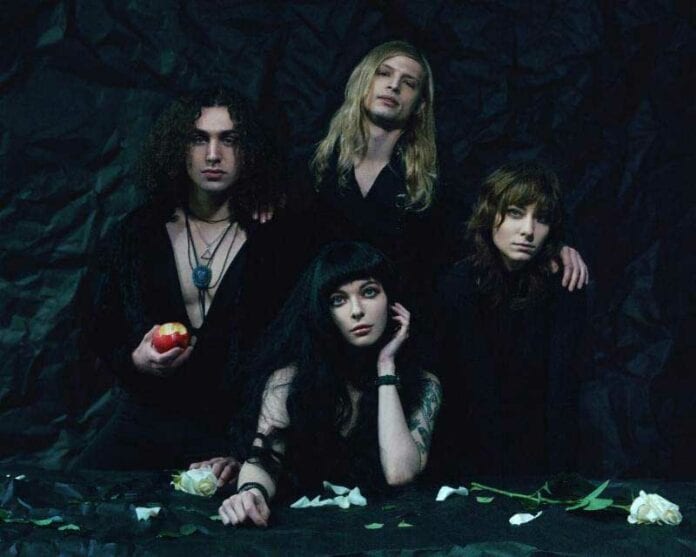 Psychedelic glam rockers Starbenders have popped the champagne bottles to toast the proclamation of their signing with world renowned independent rock label Sumerian Records. To celebrate the announcement, they have released their first single, “London,” with a woodsy sci-fi fantasy film that carries echoes of David Bowie’s The Man Who Fell to Earth.

Speaking on their new label deal with Sumerian Records, Starbenders say, “Signing to the label is a match made in heaven for Starbenders. Ash Avildsen is ‘the’ rock ‘n’ roll crusader who flies his Sumerian flag highest in this epic music battlefield. We are beyond excited to be invited into the Sumerian family and are ready to conquer the world with them, one city at a time. We just destroyed Japan. America… we are coming for you.”

Going on to speak about their new track, “London,” lead singer and guitarist Kimi Shelter adds, “London’s a place that exists within us more than it is a capital of the world. It’s the neverending chase for that first-time high; the relentless hunger for ecstasy ever present, begging your lips to take the pain. We abandon all fear of death for one shot at bliss.”

Speaking on his latest signing, Sumerian Records Founder & CEO, Ash Avildsen comments, “The first time I saw Starbenders on stage I was immediately mesmerized by their ethereal presence and offered them a deal on the spot. Their songs convey moods and emotions that you want to relive over and over. This is a present day rock band with true magick in their music. I am addicted.”

Starbenders are heading out on the road with Palaye Royale on their The Funeral Tour that starts tonight in Worcester, PA and continues for a further seven shows in Baltimore, New York, Orlando, the band’s hometown of Atlanta, Nashville, Colorado Springs, and Los Angeles.