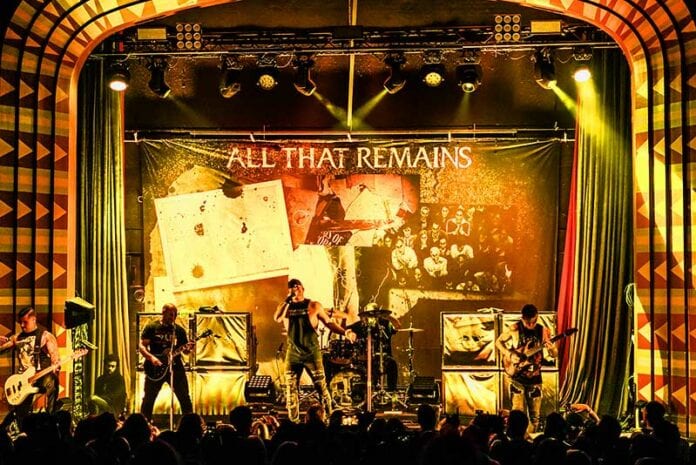 LACUNA COIL & ALL THAT REMAINS

Los Angeles welcomed quite a tour to its city—Disease of the Anima Tour featuring co-headlining sets from Lacuna Coil and All That Remains.

One of the best recognized names in symphonic metal, Italian superstars Lacuna Coil found themselves on the stage before All That Remains at the historic Regent Theater in Downtown Los Angeles. With a career that has spanned an outstanding number of years, Lacuna Coil has accumulated quite a diverse and prolific fan base. With so many albums under the band’s belt, the set list for the night nearly spanned the band’s entire musical history, from Comalies to the upcoming Black Anima.

The band brought a considerable amount of energy to their performance, with fans all eagerly jumping and moshing to the music. Female vocalist Cristina Scabbia’s voice was pure brilliance, hitting notes with an exceptional level of skill. What truly sets this genre of metal apart from the rest is the opera reminiscent vocals, with the singer bellowing out entire ballads during the songs. Male vocalist Andrea Ferro was energetic, eccentric, and passionate during his part in the duets, with edgy vocals that really bring a unique power to the band. The considerable intensity of both voices resonated throughout the venue regardless of where one stood. The other wonderful musicians of the night played with a level of ability that can impress even the most elite metal fan.

With a message that was both encouraging and powerful, fans were left with the same motivation to achieve their goals as Lacuna Coil had to reach music fame (as was revealed in a biographical book about the band).

Following suit was Massachusetts act All That Remains. The band’s legacy follows them wherever they go, bringing with it a slew of fans eager to experience the vitality in its melodies. From a career that has spanned a tremendous amount of years and a discography of impressive range, it is of no wonder that fans lined up for hours to catch a glimpse of All That Remains. The music itself has always had a very clever mix of harsh and soft vocals, intermingling screams with clean singing and eager growls. What was most impressive was how incredibly tight this act was, each member played with an equal fervor and veracity that, if there were any mistakes in the set they would definitely go unnoticed.

With the tragic passing of Oli Herbert, the subsequent concerts after his loss felt like a grand tribute to his contribution and love for the band. The Los Angeles date of the tour was certainly no exception to this, with new guitarist Jason Richardson playing Oli’s parts brilliantly. Jason has been such a welcome addition to the band, with a performance style that fits perfectly with the group. Frontman Philip Labonte knows how to work a crowd, consistently engaging with the audience and eliciting a fabulous response from the fans.