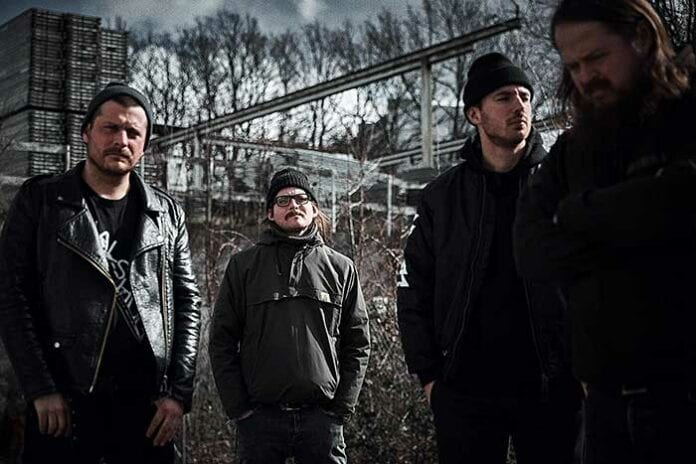 When gnarly punk, pure metal and the swagger of hard rock meet, it can only mean one thing: the unholy rebirth of HELHORSE! Be part of one of the loudest, dirtiest and melodic riff fests of the year!

HELHORSE on the video:
“The video was filmed and edited by our partner in crime, Andreas Benthien and Jess Bang Hansen. However it is the true genius of Sarah Lee Armstrong that brings this video to life. Our minds are blown by her genius.”

HELHORSE singer Mikkel on the song:
“War Drums is basically an inner monologue. It’s a song written to myself whilst facing my darkest demons such as self loathing, anxiety and burning rage. I’m looking into these dark places, they feel very familiar, but I choose NOT to climb down into them. So War Drums is also a song of hope, about taking the OTHER choice. About chasing to live free of fear and crippling expectations – it’s a song about being alive and present in the world. War Drums is by far my most personal lyric ever and it is provides a lyrical tapestry to the most brutal and beautiful  voyage. We are very proud of this song.”

HELHORSE are no strangers on the international scene, sharing stages with acts such as AC/DC, Rammstein, and Slayer, while touring Europe with Karma To Burn and Phil Campbell to name a few.

The new album, Hydra, is set to elevate this excellent four-piece even further into the minds and hearts of heavy metal fans all over the world. Hydra has everything you need as a fan of heavy music. Riffs are ripping, the choruses are bigger than Trump’s ego, and the energy is authentic as it is infectious. The lyrical theme of the album is focused on seizing the day, and not to letting triviality drag you down. Or in Mikkel Wads words: “The perpetual rage feeds desire – that sums up pretty well how I felt writing the lyrics for this album. I have channeled my restlessness, my anger and my disdain for triviality and overall bullshit.”