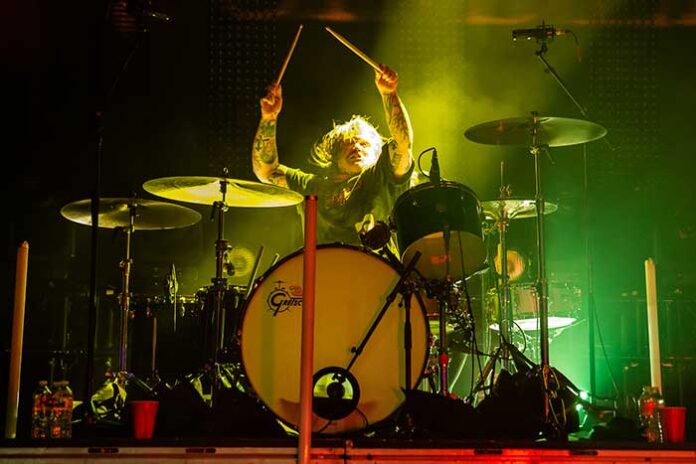 UNDEROATH with Spiritbox, Bad Omens, and Stray from the Path
San Francisco, CA
The Warfield
02.26.22

Underoath performed in San Francisco this past week and brought the energy to The Warfield. Opening up the show was Stray from the Path, Bad Omens, and Spiritbox.

Stray from the Past played a great selection of songs like “First World Problem Child,” “Fortune Teller,” and “Outbreak.” The crowd was going crazy during their set and they really started the show off in an exciting way.

Next up was Bad Omens, who had a very interesting set. The band started out more melodic and throughout the set got heavier and had more crowd interaction. Their singer at one point wore a ski mask during the performance and overall the vibe of the set was great. They played songs like “The Death of Peace of Mind,” “Like a Villain,” and “Dethrone.”

Spiritbox was next and the last of the openers. It was their singer Courtney’s birthday and fans in the crowd sang her happy birthday and gave her a bouquet of flowers during their set. The fans were having a great time singing along and rocking out to Spiritbox’s set and they had a great energy live. They played songs like “Circle with Me,” “Hurt You,” and “Eternal Blue.” At the end of their set, the band walked out with a cake for Courtney and the crowd sang happy birthday to her once again, alongside the rest of the band.

Lastly was the reason everyone was there, Underoath. They played a ton of classics like “Its Dangerous Business Walking Out Your Front Door,” “In Regards to Myself,” “Reinventing Your Exit,” “A Boy Brushed Red Living in Black and White,” and “Writing on the Walls.” Of course, they played other hit songs like “Thorn,” “Hallelujah,” and “Damn Excuses.”

The crowd was thrilled to hear this 15 song set list from Underoath. There was a great mix of fans that were excited for new and old songs, and seemingly fans that were may have been seeing them for the first time and finally hearing these classic songs live. Overall, it was a great show full of amazing bands and fans that were having the time of their lives on a Saturday in San Francisco.