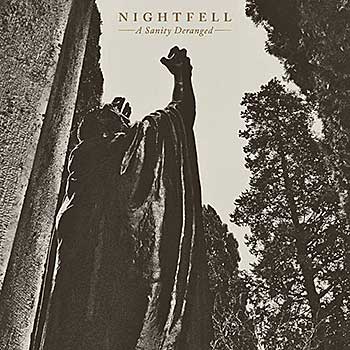 BLACKENED DOOM: There have been untold numbers of claims by artists of all stripes that the recent downswing in the mood of their music is the result of the world around them changing for the worse. Particularly, this plummet is representative of the pronounced shit-stain that the environment and politics have become. If one considers the din emanating from the dour duo comprising Portland’s Nightfell (Tim Call and Todd Burdette) as the result of recent events, Jesus fuck, I’d hate to consider how much more miserable, wretched, and crestfallen future albums will be if the chaos of conservative politics continues its worldwide growth and humanity keeps sticking Mother Nature the high hard one.

A Sanity Deranged already presents as the soundtrack to a suicide pact falling somewhere between the forlorn ache of Spectral Voice, Evoken, Morgion, and Paradise Lost with the occasional crusty melody reference to Burdette’s day job in Tragedy. But as for the pair’s most recent work—their third and first in four years—it kicks off on a note somewhere between spacious, avant-garde, sludgy black metal (“No Life Leaves Here”) before settling into transposing the weight of recent human misery, anguish, and challenge into a coruscating morass of abbreviated funeral marches. “To the Flame” is a lumbering, haunted beast that’s surprisingly catchy, while “The Swallowing of Flies” picks up the pace with prominent cymbal work giving an extra injection of energy.

There are beacons of black light amid the frighteningly dim outlook where “(As Now) We Must Succumb” expresses mild connections to crust core from behind a depressive wall of death/doom guarded by Disembowelment. Still, at around 35 minutes, the consistent march of doom tempo can get tiresome and reveals an inherent weakness of the genre that not even Nightfell’s abject grief and despair can authoritatively overcome. ~ Kevin Stewart-Panko

HATEBREED: Weight of the False Self