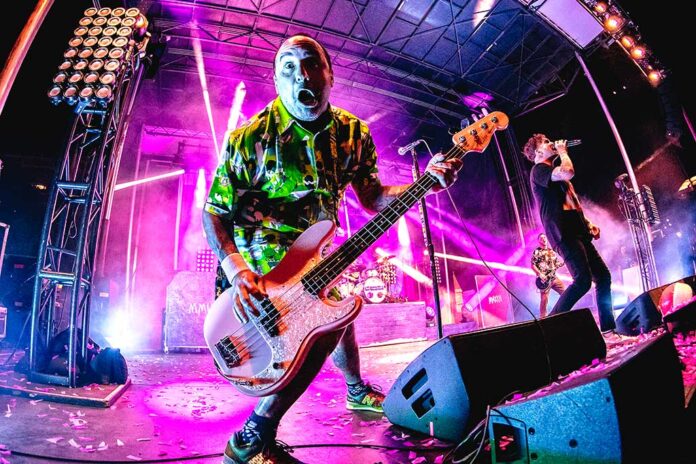 Pop punk fans were graced with a beautiful sunny day to celebrate New Found Glory’s 20 Years of Sticks & Stones festival held at The Palladium Outdoors. Two stages, merch, drinks, and food trucks filled what used to be just a parking lot. It felt like a mini Warped Tour in the heart of Worcester.

The music began shortly after doors opened, making people even more eager to get in. The band 5ever opened the day, helping to get fans in the mood as they wandered the grounds seeing everything the festival had to offer. As the main stage was being set up, Spaced took over the side stage. This hardcore New York band brought a high punk energy as they commanded the stage. Lead vocalist Lexi’s pink hair drew fans to the band, and her incredible voice and energy kept them there.

Switching gears to the main stage, Piebald celebrated being back playing with so many old friends. Each member of the band was dancing all over the stage, thrilled to be at such an incredible event. They even brought their own hype man, Dana, who started the wave, got fans clapping to the songs and sending beach balls all over the crowd. The band played their 1999 hit “Still We Let It Choke Us”off of the album If it Weren’t for Venetian Blinds, It Would Be Curtains for Us All.

Back over to the side stage, Tulsa, Oklahoma’s Cliffdiver was eager to start playing. This seven member group covered every inch of the stage and joy covered each one of their faces. Both vocalists, Joey Duffy and Briana Wright, sung with their souls, and the shining star of the set was the saxophonist Dony Nickles. He quickly won the crowd over with his powerful yet playful notes. Each member interacted with one another, showing the beautiful relationship they had together. They played their song “Super Saiyan Al Pacino” off of their 2022 album Exercise Your Demons—a creative song for a very fun and creative group.

As Cliffdiver finished up their set, A Loss for Words was ready to take over the main stage, and fans were thrilled to see the band back in action. Immediately, lead vocalist Matt Arsenault hopped off stage and onto the gate to sing with the sea of fans that covered the lot. The fast paced beats kept the band and the crowd moving through out the entire set. Arsenault spoke about Four Year Strong’s influence on the band, so being able to share the stage with one another made the show that much more special. A Loss for Words played “JMR” off of their 2011 album No Sanctuary, which ends on the lyrics “this is where you belong”—perfect words to describe the energy of this incredible festival.

The Chicago five-piece Action/Adventure waited anxiously for their turn to play. Vocalist Blake Evaristo spoke about how it was a dream come true to be playing with so many bands they all grew up listening to. The band traveled all the way from Chicago just for this show, and they certainly put their all into their performance. Every member was joyfully expressive as they jumped all over the stage. It was clear that playing music is this band’s true passion and that love spread to the crowd.

Turning back time to 1997, The Movielife took over the main stage. Nostalgia filled the air for fans and bands alike, as The Movielife played songs such as “This Time Next Year” and “Pinky Swear”off of This Time Next Year (2000). The entire crowd was jamming out to the upbeat sound, as beach balls flew through the air, adding to the fun of the set.

Closing out the side stage was Be Well. Vocalist Brian McTernan spoke on his struggle with mental health and being a father not wanting to make the same mistakes his has made in the past, nor did he want his daughter to make the mistakes he did—a genuinely open conversation that many can relate to about the fears we face on a daily basis. Bringing up this conversation made the vocalist, and entire band, that much more relatable and created a truly emotional connection with the fans. As the group played, fans reached over the gate screaming lyrics with every ounce of energy they had. The set seemed to bring a cleansing wave of positivity for everyone involved.

It was finally time for the three main acts of the evening. New York’s Bayside was first to the stage. Fans immediately began crowd surfing, screaming the lyrics to hits such as “The Walking Wounded” and “They’re Not Horses, They’re Unicorns”off of the 2007 album The Walking Wounded that brought Bayside to fame. The love for the band was clearly shown by all watching, including photographers who were jamming out while they shot away. The band spoke about memories of playing Skate Fest at the same venue years ago, sharing the stage with bands such as The Movielife and Coheed and Cambria. Going from playing a small stage to being one of the biggest main stage acts of this festival was an amazing experience that they were incredibly grateful for, and that absolutely showed during their performance.

Up next was New England’s favorite pop punk band, Four Year Strong. Being in their hometown of Worcester had the crowd anticipating a phenomenal show. Friends and family (including members of Inspirit—previously Vanna) flooded the stage area ready to support the band. Dan O’Connor (guitarist/vocalist), Joe Weiss (bassist), Alan Day(vocalist/guitarist), Jackson Mass (drums) ran onto the stage hyping the crowd up. They opened with “Wasting Time (Eternal Summer)” from their 2010 album Enemy of the World. Everyone in attendance was off their feet screaming the lyrics with the band, you could sincerely feel the hometown love and support that surrounded the entire venue. Four Year Strong was supporting their 2021 release Brain Pain, playing songs such as “Get Out of My Head,” “Learn to Love the Lie,” “Talking Myself in Circles,” and “Brain Pain.” The crowdsurfing was wild, with person after person flying to the front of the stage to share their love for the band. The crowd was especially thrilled when Four Year Strong covered Green Day’s“Brainstew/Jaded.” It was incredible hearing the entire venue sing together in unison. They closed with “Go Down in History” (Four Year Strong, 2015), an accurate title for this extraordinary group.

Now came the time everyone was waiting for. The stage quickly changed over in preparation for New Found Glory. As the banner dropped, fans were giddy with excitement. Just before the band joined the stage, “A Thousand Miles” by Vanessa Carlton was played, which had fans singing together, bonding them for the reason they were there. As the song faded out, old news reports about New Found Glory playing The Vans Warped Tour played overhead and the band ran onto the stage. Bright colorful lights covered the stage and brought an unreal spirit to their fans. The band went all-out in supporting the 20th anniversary of their album Sticks and Stones. There was confetti, bubbles, and beach balls. It was not just a show, but a party. Vocalist Jordan Pundik stated that every band that played was picked by New Found Glory because they were each part of the band’s career in one way or another. The significance behind the entire festival was beautiful and made it a day no one would ever forget.