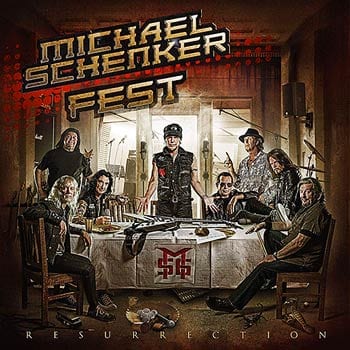 HISTORICAL HARD ROCK: It’s a sign of how popular and respected Michael Schenker is that he can get together three of the singers he’s previously worked with, one he’s working with now, call it a “fest,” and no one has dared to refer to him or this whole idea as arrogant or self-indulgent. Schenker’s bona fides go back before most of us were born, so if the man wanted to rock out on the Scorpions songs he wrote with a harpsichord and bouzouki in his backing band, he could probably get away with it. Luckily for him, his fan base is ultra dedicated and willing to sit with the six string maestro through thick and thin. And Resurrection is very thin. There’s no doubting the vocal talents (Gary Barden, Graham Bonnet, Robin McAuley, Doogie White), nor the guest guitar spots (Kirk Hammett, Wayne Findley), least of all Schenker himself, but the majority of this is milquetoast hard rock, simplistically approached and almost rote in delivery. Songs are bogged down in the sort of riffs fellow old school rockers have been recycling ad nauseam since the 80s. Where the few strengths lie are with vocal lines, choruses, and random guitar pyrotechnics. Infectious vocal phrasing elevates “Take Me to the Church” to great heights and is an excellent counterpoint to “Night Moods,” “Warrior,” and others cut from a redundantly dull school that has been castrating Led Zeppelin and Dio for years already. ~ Kevin Stewart-Panko