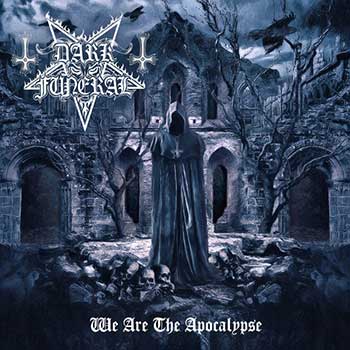 DARK FUNERAL
We Are the Apocalypse

BLACK METAL: Swedish black metallers Dark Funeral—who have been around since the days of the second black metal wave—have finally returned with their long awaited seventh studio album We Are the Apocalypse. Having undergone multiple lineup changes over their lengthy, nearly three decade long career, this is the band’s second album with fairly new vocalist Heljarmadr. He joined in time for the previous record, 2016’s Where Shadows Forever Reign, and with this album, further cements his position as a crucial key member and songwriter of the group.

Heljarmadr’s lyrical content fits perfectly with the band’s thematic staples of satanism and anti-Christianity and is developed deeper on We Are the Apocalypse with vivid cinematic imagery that captures the listener’s imagination. Heljarmadr noted that he was inspired by movies, and that certainly becomes apparent from the start. The whole album has a cohesive, fluid feel with a beginning, middle, and end, although each song has its own open-ended story to tell. Opener “Nightfall” sets the scene. The highlight is the chorus, with Heljarmadr’s brutal cries of “nightfaaall!” The song itself is a call to arms for a demoness, an incitement for her to come to earth and claim it, laying waste to everything in her path. Visually, there’s so much going on in these tracks. Close your eyes and listen, and allow the movie to play out inside your head.

“Nosferatu” is the most obvious cinematic reference, with Heljarmadr drawing direct inspiration from the 1922 vampire classic and putting his own words to it. And “Leviathan” creates an awe-inspiring, visual soundscape of vast swathes of water with ominous sea monsters lurking in their murky depths. The latter is one of the softer songs on the record, with some delicate guitars from Dark Funeral mainstay and legend Lord Ahriman, the only member who has been in the band right from the get-go.

Along with fellow axman Chaq Mol on rhythm, it’s the heavy lay of riffage and dirty guitars that are the driving force and blackened heart of the band, and can be heard in full-force on the rest of the album, which barely has any breathing room. It’s heavy, brutal, and non-stop. Yet it’s that intensity that makes We Are the Apocalypse such a captivating listen. The guitars provide a thick layer of noise under which Heljarmadr’s grueling vocals can float over the top. At times incomprehensible, at others the words become clearer and the images more defined, the occasional spoken word sections helping to create further atmosphere. It’s worth giving a special mention to the band’s new rhythm section—Adra-Malek on bass and Jalomaah on drums. They do a sterling job throughout, especially on “Let the Devil In,” with its cascading thundering drum intro.

Black metal is in a healthy place right now and is certainly safe in the masterful hands of Dark Funeral. Ending on the fast drive of the triumphant title track, it’s a final celebration of darkness as the world burns. The apocalypse is here. Time to rejoice. The band really seems to have found its feet again with this new lineup, both in and out of the studio. We Are the Apocalypse will certainly stand up well with the rest of their back catalog as the band continues to move black metal into the modern era. ~ Becton Simpson