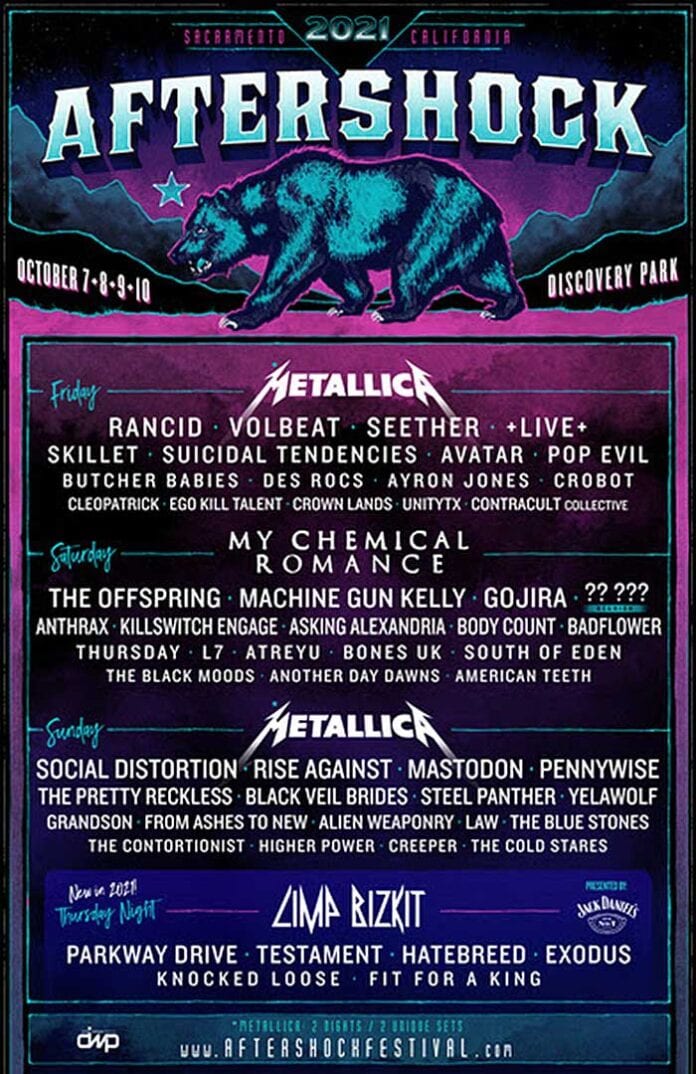 Festival Expands With The Addition Of A Fourth Night, Headlined By Limp Bizkit

Danny Wimmer Presents is excited to announce the return of Aftershock—the West Coast’s Biggest Rock Festival–to Discovery Park in Sacramento, CA on October 7, 8, 9 and 10. The expanded 2021 event will be bigger and better than ever, including the new Thursday night concert, presented by Jack Daniel’s–an epic celebratory evening to kick off the anticipated return of the festival that has sold out for the last five consecutive years.

As previously announced, Aftershock 2021 will be headlined by Metallica (performing two unique sets, one on Friday and one on Sunday)and My Chemical Romance (Saturday), who were both confirmed for the sold-out postponed 2020 event. The incredible and diverse Aftershock 2021 lineup will also include: Limp Bizkit, Rancid, The Offspring, Social Distortion, Rise Against, Volbeat, Machine Gun Kelly, Mastodon, Gojira, SEETHER, Parkway Drive, and many more.

Passes for Aftershock 2021 are on sale now at www.AftershockFestival.com.

Rancid said, “We can’t wait to play at Aftershock 2021 with our Bay Area brothers Metallica. We first played with them on the Lollapalooza tour in 1996 along with the Ramones and later down the road we toured across South America together. It’s gonna be wild, see ya in the pit!”

The current Aftershock 2021 music lineup is as follows (subject to change):

Passes are on sale now and can be purchased for only $20 down. Payments will then be spread out over the next nine months, beginning in December. Festivalgoers are encouraged to buy early and save since 3-Day and Single Day pass prices will increase in the coming weeks. 4-Day passes are very limited and there will be no single day passes sold for Thursday night. Passes for Aftershock have sold out for five years straight.

Pass purchasers will receive info about the festival’s Park & Ride shuttle program closer to the show, as there will be no onsite parking for Aftershock 2021.

New in 2021 is the exclusive Aftershock’s 10 Days of Shocking Giveaways which launches Friday, October 23, 2020 and will include the opportunity to win amazing prize packs from festival sponsors, along with passes to Aftershock 2021. Visit www.AftershockFestival.com and follow Aftershock on social media to learn more.

In 2019, Aftershock celebrated its biggest year in the history of the California rock festival with 97,500 in attendance during the sold-out three-day event. The sold-out 2020 festival was rescheduled to 2021 due to COVID-19 guidelines.

As Aftershock 2021 draws near, Danny Wimmer Presents will be working with local officials to make sure the festival conforms to the then-current social distancing protocols.

JOHN 5 Drops New Video for “Land of the Misfit Toys”