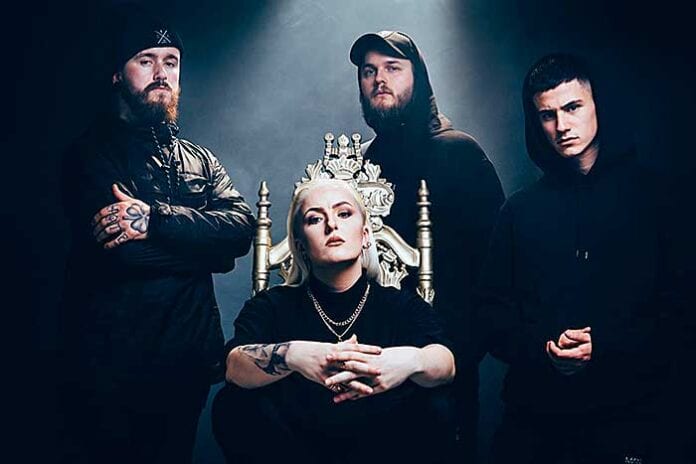 Fast rising UK based unit VEXED once again showcases the brutality they’re made of on their long-awaited debut album, Culling Culture, via Napalm Records. Combining both visually cinematic and oppressively honest material with a refined symbiosis of technically, adept hardness, and droning heavy instrumentality, VEXED goes all-out on absolutely every single track.

Lead vocalist Megan Targett of VEXED tells us her Top 5 Songs for Removing Toxic People from Your Life.

This is the first song I heard by Alpha Wolf. It starts with the lyrics, “You’re just a pussy in a black hoodie pushing your luck,” and that line resonated with me. There are so many people who like to talk shit about me or my band, and yet when they’re face to face with us, they hide under their hood and don’t say a word. Vexed’s success brought out a lot of jealousy and nastiness in people who I spent years playing shows alongside and thought were my friends. Some of those people I’ve known for over 10 years. I always supported their bands, did free photo shoots for them, etc., but they’ve never once said, “Well done,” just chatted shit. So, this song is great for remembering that those who support you when you’re down, but act as if they’ve never met you when you’re up aren’t worth your time.

The perfect song for when you are absolutely raging. I find anger really difficult to process, and so I use music as a positive and healthy outlet alternative. When I am beyond the point of anger and I’m boiling over into rage, this song is just pure catharsis. Many times I have driven around in my car when I’ve been in so much emotional pain and just need music to block it out. This is usually one of the first songs I will blast at full volume.

Stepping away from metal for a minute and heading into the world of pussy power, alternative rap pop goodness, I discovered Ashnikko a couple of years ago after she performed one of her own songs “Cry” with Employed to Serve. She screamed the whole thing for the first time ever and did an amazing job of it. She is so unique and unapologetically herself in the quirkiest of ways. She reminds me to be a bad bitch and listening to her music always makes me feel empowered.

I used to get so caught up in worrying about what other people thought of me. I would always try and help everyone in any way that I could and it would always result in the same outcome—me getting hurt. This song is great for remembering that haters’ opinions mean shit. If it makes them feel better about themselves commenting immature and ignorant things online, go for it! I find their need to try and put me down hilarious because it shows how insecure they are about themselves rather than anything I’ve done.

I’m just as much a rap fan as I am a metal fan. However, I find that rap often has more honesty in the lyrics and a blunt approach that sometimes hits the spot better than metal. Megan Thee Stallion is so gifted with her words and rhythms and isn’t afraid of people knowing how much she respects herself and won’t settle for anything less than 100. If anyone ever tells you that you can’t achieve your goals, go listen to Megan Thee Stallion. She’ll remind you that you definitely can, if you work hard enough, and also fuck the people that tell you can’t.