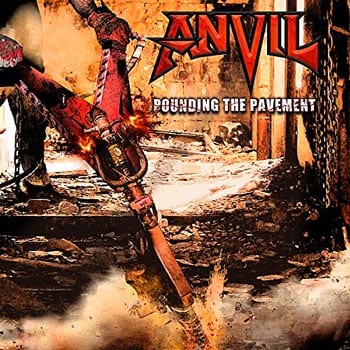 METAL ON METAL: Canada’s legendary Anvil has made a career out of mixing old school speed metal with a healthy dose of tongue-in-cheek humor and single entendres, throwing in some social commentary for good measure. The results were stunning in the early days, but faded somewhat as the band limped into the 90s and didn’t really recover until they had a mini-renaissance in 2007. The past couple of records have, sadly, been a bit less memorable, but number 17 shows more signs of life and a willingness to experiment that has been lacking for ages. Some vocal effects and unusual rhythmic patterns help differentiate the tunes from one other and from past efforts. There are some real highlights on Pounding the Pavement, starting with the catchy as hell “Doing What I Want” and the stomping “Nanook of the North.” Much of the album is slow to midtempo, with only “Ego” and the shuffling “Warming Up” really moving into faster territory. For a band that helped kick-start the original speed metal movement, it feels pretty laid-back, but then that is just Anvil doing their own thing, as always. Lips’ vocals are starting to show their age a bit, but his lead playing is on point, and Robb Reiner is still one of the greatest drummers in all of metal. Newcomers would probably be better off starting with one of the classic records, but longtime fans will appreciate this effort. ~ Daniel Hinds

JOHN 5 AND THE CREATURES: Invasion