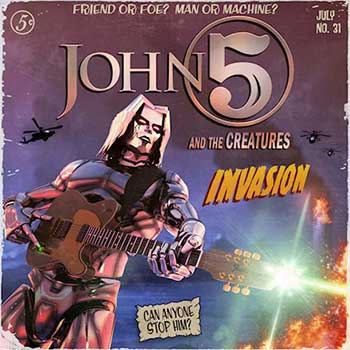 JOHN 5 AND THE CREATURES
Invasion

GROUNDBREAKING GUITAR INSTRUMENTALS: Nine records in and the most prolific guitarist of the past few decades just can’t seem to stop reinventing himself. Invasion is John 5’s definitive collection, boasting stadium pleasing shredders like “Midnight Mass” and “Invasion,” while simultaneously throwing down a gauntlet of hooky fun in “Howdy” and “Crank It.” As evidenced by his sold out shows across the world, Invasion is more than just guitar solos and instrumentals that could be easily lifted from a Rob Zombie album, but a true testament to John 5’s ability to stand alone as a solo artist, traversing strange landscape after strange landscape to cover a multitude of genres. Invasion chooses to implement words only where necessary, using a voice box to further exemplify the animated robot themes the record puts forth. And if you thought an instrumental album couldn’t be catchy, think again, as listeners will be mimicking the hook from “I Am John 5” for years to come. What the 47-year-old master guitarist has done with Invasion is nothing short of groundbreaking, taking multiple genres, from bluegrass to EDM, and molding them into a cohesive thematic storyline. Just look at the album cover, watch the video for “Zoinks” (with a cameo from Nikki Sixx), and listen to this record blasting from your car stereo. John 5 will take you on a wild and worthy journey. ~ Jameson Ketchum

VARIALS: Scars for You to Remember