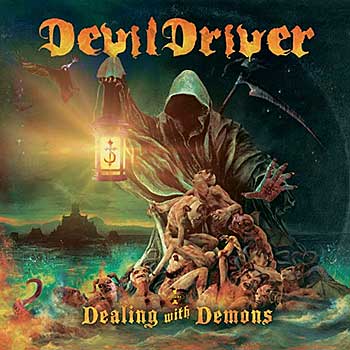 DEVILDRIVER
Dealing with Demons I

GROOVE METAL: Right off the bat, you’ll notice that this isn’t the DevilDriver album you might have been expecting. The California groove metal merchants have come up with a monster of an album on its ninth full-length release, Dealing With Demons I via Napalm Records. Written and recorded as a double album, Dealing with Demons II will follow sometime in the near future.

Featuring frontman Dez Fafara, lead guitarist Mike Spreitzer, rhythm guitarist Neal Tiemann, drummer Austin D’Amond, and bassist Diego Ibarra, the quintet have become a tight knit unit. The songwriting in DevilDriver has really come into its own with Spreitzer, Tiemann, and D’Amond as the core songwriting team creating the music, while Fafara’s vocal dynamic and lyrical content are as poignant as ever. Although it’s not a true concept album, the running theme of the album is “the purging of demons” that touch upon the occult, witchcraft, and spirits (see “Iona”).

The album’s first three singles, “Keep Away from Me,” “Iona,” and “Nest of Vipers,” have made a very good impression on the band’s fans so far and proves that DevilDriver has created something special this time around. Last album, 2016’s Trust No One, fared above average in the grand scheme of things, but Dealing with Demons I has already topped it.

Album opener “Keep Away from Me” really hits home during this current situation in 2020. Although it was written and recorded before this worldwide pandemic, it’s eerily prophetic with its lyrical content and ominous, dissonant guitar melodies. “Iona,” with its chilling atmosphere and vivid storytelling, makes you think to yourself that you’d sure hate to fuck with this chick who “Carries a black rose!” “Nest of Vipers” has an almost Western gunslinger feel at first, accompanied by some infectious and memorable guitar melodies that makes this track really stand out compared to previous DevilDriver material.

DevilDriver has noticeably introduced a few different elements on this record. There are slower, more melodic tempos compared to incessantly fast tempos. There’s more dissonance in the riffs. Although there are not a lot of guitar solos, but when they do show up, they are hugely melodic. And the atypical melodic clean vocals from Dez on the verses on the highly engaging “Wishing” has never appeared on a DevilDriver release before, but it’s so suitable for this song.