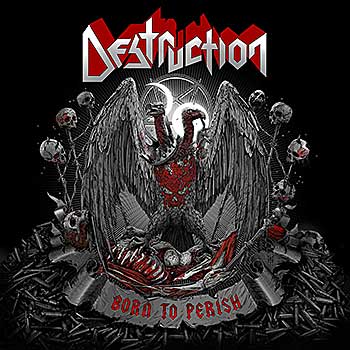 THRASH: Imagine you pretty did much the same thing day after day, year after year, for thirty-seven years. Hell, most of us can’t even do anything for thirty-seven consecutive minutes before complaining about being bored or having an arcane form of repetitive strain injury emerge that requires three sick days to recover. Destruction’s core members—bassist/vocalist Marcel “Schmier” Schirmer and guitarist Mike Sifringer—joined forces in 1982, and while there have been missteps and pauses along their journey, the pair has been delivering uncompromising thrash metal for the vast majority of that course of time. Heck, there have even been side-projects, guest appearances, and production work padding time and augmenting the almost five decade write/record/tour/find new members cycle they’ve been on.

Born to Perish is the band’s 14th studio album and should be a record that even those who think 1984’s Bestial Invasion of Hell demo and Sentence of Death EP are the apexes of the Destruction discography make a point to check out. Believe you me as this sentiment/recommendation comes from the yap of someone who’ll forever vehemently defend the band’s first three full-lengths as their best work. The 10 songs here exude a remarkable energy, though checking the album out exclusively to see the dog and pony show of dudes in their 50s bringing it harder than the young bucks of today is a misguided notion. The live wire injection that is Born to Perish is matched by class-A material and songs that bristle with enough fresh references to their own signature brand to seamlessly slot into a set list of classics, if not be earmarked as classics in their own right.

Aside from the manner in which “Butchered for Life” sharply moves in and out of balladic cleanliness far too abruptly, a couple of weaker riffs in the title track that don’t cut the mustard, some filler towards the record’s end, and a myriad of dumb lyrics, Born to Perish is teeming with surprising amounts of ruthless hunger vaulted by experience and skill. These combine to great impact in the rollicking Southern rock-tinged “Inspired by Death,” the old school staccato riffing of “Betrayal,” the scalar strutting swagger of “Filthy Wealth,” and the heads down/barrels set aflame thrash of the majority of the rest of the record. Schmier’s voice is as raspy and bitter as ever, Mike’s rhythms are razor-sharp in their incisiveness, and the solo work (which he presumably shares with recent recruit Damir Eskić) are the sort of gorgeously phrased works and flashy displays that fret watchers and six-string nerds will ruin their panties in salutation of as old school warriors en masse soil battle vest after battle with drool and pints of lager split in excitement. ~ Kevin Stewart-Panko