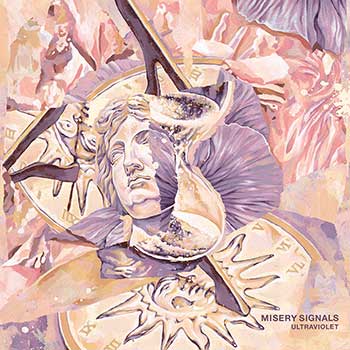 MODERN METALCORE: Misery Signals has always had a sound that was uniquely their own, quickly emerging as one of the breakout metalcore acts in the early 2000s. Even with lineup changes midway through their career, they’ve always managed to have a sound that was recognizable from the less innovative sea of metalcore bands that have since oversaturated the genre.

On this latest record, the band returns to their original lineup from their 2004 release Of Malice and the Magnum Heart, most noticeably marked by the return of vocalist Jesse Zaraska. The resulting album, Ultraviolet, has all the sensibilities of a modern Misery Signals album, but at the same time, feels like a time capsule to the early 2000s metalcore scene.

Early single “The Tempest” pulls absolutely no punches kicking the record off. This track feels like it could’ve been on Of Malice… with hurried passages, rife with punishing guitar riffs as Zaraska’s screamed vocals eclipse everything, touting a hopeful message in the chorus with melodic accompaniment from lead guitarist Ryan Morgan.

The band really shines in those tracks where you get a taste of the melodic with the heavy—this juxtaposition is perfected in “Sunlifter,” “Old Ghosts,” and “The Fall.” “Sunlifter,” and “Old Ghosts,” could’ve easily been on any of the band’s previous three records and are peak Misery Signals—chock-full of crushing breakdowns, gang melodic vocals, catchy guitar riffs, and that massive sound that few bands of Misery Signals’ caliber can match. Meanwhile, “The Fall” has an amazing late interlude with Morgan’s clean vocals hauntingly floating above the shimmering guitar reverb, leading into Zaraska’s emotive screaming.

The album closes just as huge as it started—with the final two numbers exemplifying the incredible musicianship of this five piece. “Cascade Locks” begins with a few strummed chords, leading into an intricate drum passage and straight into a frenetic circle pit-worthy verse section. Meanwhile, the breakdowns on “Some Dreams” are sure to leave someone injured, as Zaraska laments what could’ve been, screaming, “I lost my heart, I lost my breath, I lost my head when I left you…”

The raw emotion of Zaraska’s vocal range lends itself well to tracks like “Some Dreams” and “The Tempest,” just as much as it hurts the band’s sound on tracks like “Cascade Locks” and at other times throughout Ultraviolet, where the absence of former vocalist Karl Schubach is so glaringly apparent. There is a low-end that is just missing with Zaraska’s at times atonal mid-high screams in places where you want to hear the low guttural growls that were such a fixture of Misery Signals’ last three albums.

On Ultraviolet, Misery Signals makes an impressive return from seven years away, yielding an album that sounds huge and will bring that warm feeling of nostalgia for the longtime fans that have been with them since the beginning. For the others who may have discovered the band through 2006’s Mirrors, or 2008 fan favorite Controller, this album may be too jarringly different to fully satisfy. ~ Nathan Katsiaficas