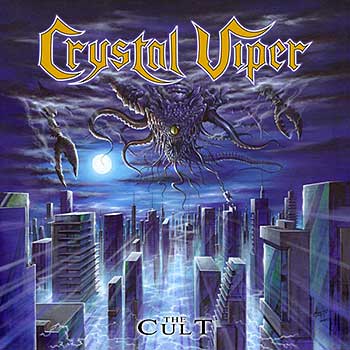 CLASSIC HEAVY METAL: Polish heavy/power metal band Crystal Viper has released its eighth full-length album, The Cult. Formed in 2003, the quintet—led by vocalist/guitarist Marta Gabriel—has entered a new era. It’s the band’s first album for Listenable Records and the first album featuring new drummer Cederick Forsberg. The Cult finds Crystal Viper delving back into their roots of pure, traditional heavy metal. Regrettably, the band had lost a little steam on its mid-era releases, but they’ve steadily garnered more praise for their recent releases. And The Cult is no exception.

After the rather forgettable instrumental opener “Providence,” the title track kicks in and best exemplifies the band’s core sound, decorated with a darkened atmosphere, memorable vocal lines, blazing guitar riffs, and dual melodic harmonies. Marta’s glorious vocals are in fine form from the get-go by unleashing piercing highs, killer midrange wails, and soaring harmonies, all performed with a commanding presence.

“Whispers from Beyond” also shows off Marta’s strong suit, reminiscent of Brittney Slayes of Unleash the Archers with a memorable and uplifting chorus. Closing out the record is a fantastic cover of King Diamond’s “Welcome Home,” featuring a guest spot solo from original guitarist Andy LaRocque. Crystal Viper has always performed at least one cover tune on each of their records, and the band really hits the nail on the head with this one, as the track is perfect for Marta’s range and vocal delivery.

The Cult was produced by Marta’s husband Bart Gabriel and mixed by drummer Cederick Forsberg, creating a crisp and pristine sonority. The lyrical themes throughout the record are inspired by the works of H.P. Lovecraft, with the title track specifically inspired by the Cthulhu story. Plus, the killer cover art by Mario Lopez also ties into the Lovecraft theme. Crystal Viper isn’t trying to reinvent the wheel within the classic metal realm with The Cult, but when you play this style of metal this well, you don’t have to. ~ Kelley Simms