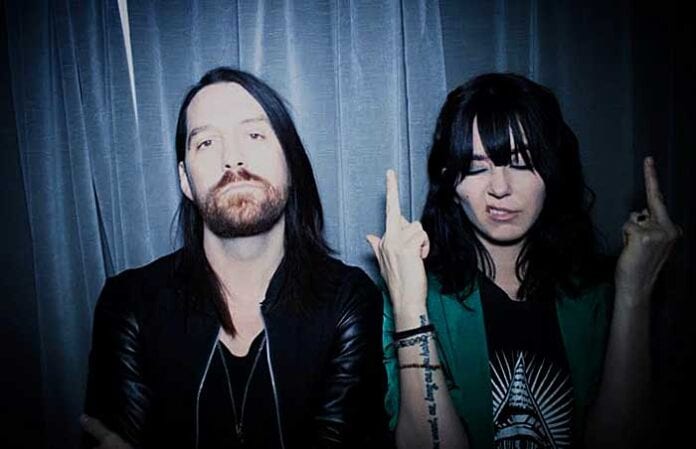 INTERVIEW WITH DANYELL SOUZA AND TONY F
BY NAOMI SANDERS

Danyell Souza and Tony F are the duo behind Dead Posey, the alternative hard rock group that has been making waves since their song “Don’t Stop the Devil,” from 2018’s debut EP Freak Show, appeared on the TV shows Lucifer, Teen Wolf, and Jessica Jones. The band’s name is taken from the nursery rhyme “Ring Around the Rosey,” and they base their aesthetics on artists like Salvador Dali, Edgar Allen Poe, and David Lynch. Throughout Dead Posey’s music, they have touched on topics such as empowerment (“Fire Burnin”), defying your enemies (“Bad Things”), and pushing through personal barriers (“Head of the Snake”). Sticking to their inspirations and roots, Dead Posey has respect for the old sound of classic rock and brings it forward into a new wave of the genre with passion and grit.

During the pandemic, the band has put much effort into a debut full-length album, as well as trying out new sounds and styles that fit within their music. With the release of their latest EPs, Malfunction and Malfunction X Broken Down on Sumerian Records, and a new album on the horizon, Danyell and Tony discuss the band’s humble beginnings, hope for the year, and musical inspirations.

Malfunction was released last year. What was it like making that EP?
Tony: We actually started the writing for the EP in 2019, but because of tours and festivals in the fall and winter, we had a lot of fits and starts. We write and record everything ourselves, so it is a process to get things right. Then the pandemic hit as we were putting the finishing touches on it, so this one went through some different phases for us to get it to a place we were really happy with it. We look at the EP as a stepping-stone to where we’re going with our upcoming music.

“WE HAD A VISION FOR A NEW PROJECT WITH THIS DARK, ALLURING AESTHETIC, AND IT FELT RIGHT TO DO SOME SONGS WITH THAT IN MIND.”

How did Dead Posey start?
Danyell: We knew each other socially for a few years before truly making music together for Dead Posey in earnest. Both of us were doing our own music and supportive of each others’ work, but hadn’t dived fully into working together until 2016. It just felt like the right time. We had a vision for a new project with this dark, alluring aesthetic, and it felt right to do some songs with that in mind. Things started to click really quickly from then on, and we were off to the races.

Of your two EPs, which one is your favorite?
Tony: Malfunction, since we feel our sound and writing have evolved in a good direction from our debut EP. Freak Show put us on the map, and we’ll be proud of it as our first baby steps. We’ve now actually put out two and a half EPs if you count Malfunction X Broken Down, which is acoustic versions of the songs from that EP plus a Depeche Mode cover. It was all sort of a palate cleanser for us before diving into a new round of songwriting for our debut full-length that we’re deep in now.

Any secrets that you can spill about your forthcoming debut album?
Danyell: We usually like to let the music speak for itself, but it’s gonna be defiant, resilient, and exhilarating.

What do you hope that 2021 will bring?
Tony: Tours, tours, and more tours, festivals, performances with humans in the room, along with the release of our debut album!

You’re scheduled to play at different festivals, including Download. Are you excited?
Danyell: Yes! Like everyone else we’re itching to get out of the house and back on the road. Fingers are crossed that this damn virus gets the hell out of the way soon and doesn’t make anything else get canceled. 2020 was a bummer, but we really needed that time to focus on writing new material and to get the Dead Posey house in order. Out with the old, in with the new!

What can we expect from your upcoming festival performances?
Tony: All new music and a renewed energy and excitement. Our set list is going to be completely different from the last time we played live now that we will have written more songs. And we feel bands and audiences alike will be chomping at the bit to experience loud, in person rock shows again. It’ll be great!

Who are the biggest inspirations in your music?
Tony: A full list would be a mile long, but to keep it relatively short and to the point—Garbage, Depeche Mode, The Kills, Nine Inch Nails, Hole, David Lynch, and The Cure.

Where do you hope Dead Posey will be in five years?
Danyell: Working on our fifth album, touring the world, and still married!

Finally, what else can we expect from Dead Posey?
Tony: We’ll continue to use the Dead Posey soapbox to be voices for positive social change, and we look forward to donating some time and energy to causes that our close to our hearts—homelessness, women’s issues, and systemic racism, to name a few.

STINKY: The Smell of Lost Things