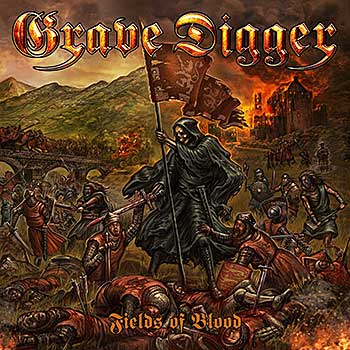 POWER METAL WITH A CAPITAL P: If you were to look up the word “prolific” in the dictionary, it’s highly likely that you might see a photo of Germany’s Grave Digger next to that entry. That’s because this venerable traditional metal act has released a lot of albums over the years, to what can only be described as a supremely faithful fan base.

Fields of Blood is the 19th such effort from Grave Digger—20 if you count the band’s 1986 foray into AOR/hair metal, Digger (and I do. Fight me.)—and it’s surprisingly solid stuff. Sure, you could be forgiven for falling out with The Digger after, say, War Games or something, but the tunes here honestly kick enough ass to make yours truly do some “digging” of his own into the band’s more recent back catalog.

Maybe it’s because the band’s album covers and lyrical concepts always seem so interchangeable, one almost assumes that the end results won’t be as musically aggressive as they are here on Fields of Blood. The thrash and power metal worlds usually do conceptual tales about William Wallace with a more melodic and/or symphonic edge, but the tunes here are as thrashy as anything Grave Digger did on such formative albums as Witch Hunter or Heavy Metal Breakdown. The double kick drums work overtime for riffs that attack again and again, lending these songs the proper feeling of war that they honestly should have, given the subject matter.

Best of all, frontman Chris Boltendahl sounds pretty damn good here, which is impressive, given that his “love it or hate it,” gravelly voiced tone was always kind of a deal breaker. Sure, he’s not going to win any awards with his range or subtlety, but his voice is iconic in that he’s just an inimitable presence—you know Boltendahl’s voice when you hear it, especially if you grew up on German power metal. Boltendahl still struggles on the ballads (see “Thousand Tears”), though, unfortunately, but thankfully guest vocalist Noora Louhimo swoops in to save the day. Elsewhere, this effort as a whole rocks with tons of energy, and even some nice Gary Moore-esque moves on “The Heart of Scotland,” while “Union of the Crown” is an all-out riff attack that gets to the headbanging real quick.

Fields of Blood was honestly a nice surprise—a meat and potatoes power thrash affair with songs that are memorable, heavy, and more dynamic than could be expected from any other band with this many records to their name. If you’re a fan, buy with confidence. If you’ve been away from Grave Digger for a while, then give this one a chance. Hopefully, you’ll have a similarly positive experience. ~ George Pacheco