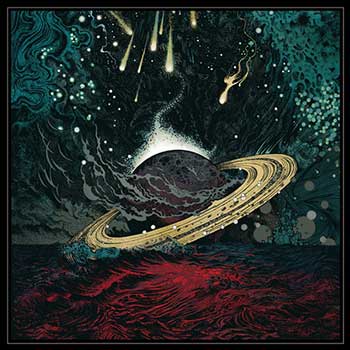 THE SHAPE OF ROCK TO COME: You’d be forgiven for thinking that Massachusetts maulers Cave In were done for after the release of 2019’s Final Transmission. The album was essentially a souped-up collection of demos following the tragedy of bassist Caleb Scofield being killed in a car accident a year earlier. With a creative partner of nigh on 25 years passes away, an album (which opened with a recording of Scofield humming the riff to the title track into his phone) technically not being completed in order to preserve its moment in time status, and the decisiveness of that title, you wouldn’t need to graduate Magna Cum Laude from detective school to draw the conclusion that Cave In was calling it. On the flip side, you can thank newest member, Converge bassist Nate Newton, and the undying spirit of music for keeping original and grieving members (guitarist/vocalist Stephen Brodsky, drummer J.R. Connors, guitarist Adam McGrath) coalesced and the creative fire of advancement lit for what is the band’s seventh full-length and probably the longest and most robustly varied record of their discography.

Cave In’s career has taken fans and followers on a furious roller coaster ride that has spanned metallic hardcore and early wave/pre-At the Gates worshipping metalcore, thrash metal, alternative/progressive/space/psychedelic rock, and combinations thereof. They’ve had the majority of their releases issued by the legendary HydraHead label and included a brief dalliance with major label stuffed shirts in the early 00s. Interestingly, the band’s post-major output has resulted in releases that are, to greater and lesser extents, amalgams of all of the above. Great for those who enjoy peaks, valleys, and compelling variety. Not so great for folks who worship at the shrine of 1998’s Beyond Hypothermia compilation and believe it’s the best thing the band has ever done.

First two tracks of Heavy Pendulum, “New Reality” and “Blood Spiller,” see the band flashing a heavy hand. The former is a bouncing uptempo bopper with magnificent call and response vocals in the catchy chorus. The latter exists more on a doomy tip with a sparkling and spacey take on St. Vitus/The Obsessed progressions and Newton’s raspy bellow contrasting with Brodsky’s Dinosaur Jr.-esque croon. “Floating Skulls” spits out an angular giddy-upping groove that falls between DC hardcore, early Nirvana, and Badmotorfinger era Soundgarden, whereas the title track is sullen and surly and pensively taps into a different side of the Seattle scene à laScreaming Trees and Temple of the Dog.

As the album progresses, mid paced rocking thunder (“Careless Offering” “Searchers of Hell,” “Waiting for Love”) and dense, Steve Wilson drenched prog (“Nightmare Eyes”) are buttressed up against mellow interludes (“Pendulambient,” “Days of Nothing”) and darkly downcast tracks that are as metallically constructed and epically layered as they flirt with explosive power ballad territory (“Blinded by a Blaze”). Additional standouts include “Reckoning,” for its acoustic dusty tavern vibe, and “Wandering Angel,” which wraps the album up by opening the entire Cave In bag of tricks over the course of a charismatic 12 minute behemoth that finishes on an extended burst of harmony guitar-driven classic rock grandiosity. ~ Kevin Stewart-Panko