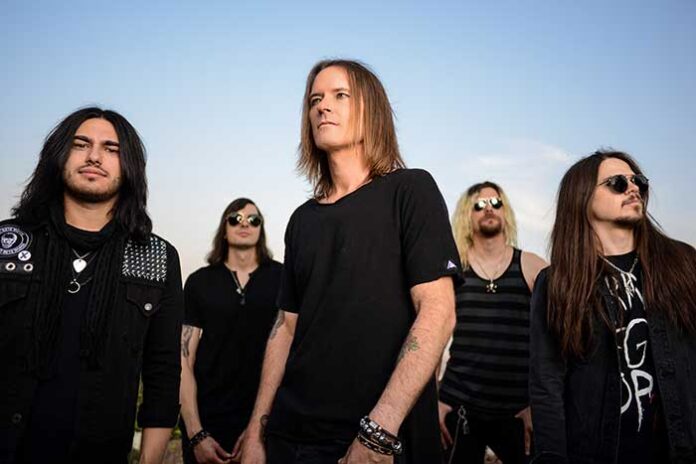 WATCH THE EXCLUSIVE PREMIERE OF THE MUSIC VIDEO FOR “THE TRUTH” FROM BUDDERSIDE ONLY ON OUTBURN.COM

“The Truth” is one of the many highlights on the band’s upcoming and as-yet-untitled album. Due this summer via oneRPM, it was recorded with producer Matt Good (Asking Alexandria, Hollywood Undead). “The Truth” follows the devilish single “Never Worth It,” which made its radio debut on KLOS ’New & Approved with Matt Pinfield” radio show earlier this month.

BUDDERSIDE is rounded out by a talented group of handpicked musicians, who after being enlisted by vocalist Patrick Stone, have been poached by some of rock’s top act to lend their skills on tour and recording duties. Guitarist Sam “Bam” Koltun can be seen playing on tour with hard rock outfit Dorothy and glam rock/metal icons Faster Pussycat. Bassist Gabe Maska was cast as the lead role of Kurt Cobain for the Las Vegas rock show “27.” In addition, guitarist Logan Nikolic can be seen touring with rock singer Diamante, who are currently on tour supporting Shinedown.

“The Truth” music video is visually gripping with bright, bold colors and landscapes that draw you in while its lyrics and overall theme is quite dark dealing with looking inside oneself to find inner truth and meaning. Can you share how you came up with the treatment and how it correlates to the track itself?
STONE: “My mother’s home use to sit at the top of the valley where we filmed the video in Santa Barbara. I’ve seen some of the most beautiful flowers and sunsets in my life there and had always wanted to shoot there. I remember sitting on her porch, it was like a theatre to watch God paint every day and night. It’s the exact opposite of where you’d expect to see this song explained. The truth is– no pun intended–that this song is so dark it’s dangerous to focus on its lesson. Hopefully, sharing it this way will allow listeners to lean into the grove and dual guitar solo more than its honest lyrics. For once, I’m actually happy to avoid explaining and more devoted to distracting with the visuals. It had to be daunting somehow, though, and I got fixated on the rapture and how insane that would be to see. Religious beliefs are not our brand, but what lies beyond the stars and the secrets we keep played out well into this story.”

What inspired you to write this song?
STONE: “The truth. Pun intended this time. What the f*ck does this life mean? What are we doing here? What happens next? I’m suffering. Life seems to be one struggle on top of another and I don’t see the light at the end of the tunnel. I’m constantly afraid the next thing is going to push me over the edge. Have I lost sight of who I am? My bandmates believe in me and writing this song together helped me see I’m not alone. We all want to know. Give me the truth! Killing ourselves to mean something to someone, for something.”

If you had the chance to be abducted by a UFO, would you take the plunge? Why or why not? If so, what truths would you expect to find from such an experience?
STONE: “Definitely. I’d expect to find exactly that, ‘the truth.’ To know the truth and to unlock the great mystery would be extremely exciting and yet bring abundant peace.”

Book Review: MEMOIR OF A ROADIE