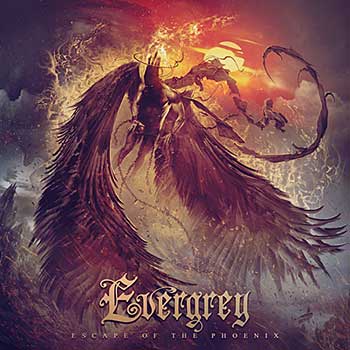 EVERGREY
Escape of the Phoenix

RESURRECTION: The title of Evergrey’s 12th full-length is something of a self-fulfilling prophecy, as Escape of the Phoenix does see the Gothenburg prog/power heavies deliver some of the more inspired material of their impressive career. This isn’t to say that Evergrey has been floundering, per se, but perhaps rather struggled to meet the heights achieved on such early killers as Solitude Dominance Tragedy, Reckoning Day, or In Search of Truth.

Escape of the Phoenix presents the band’s established mixture of heavy groove riffs with powerful melodies and Tom S. Englund’s impassioned vocals, yet does so in a manner that feels, for lack of a better phrase, “fired up.” The lead guitar playing on a song like “Where August Mourn,” for example, says a whole lot in a relatively brief amount of time, while Englund’s presence as a frontman holds it all together. The album balances out contributions from Rikard Zander nicely, as well, since Evergrey has always been adept at not letting the keyboards get lost in the songwriting shuffle. A song like “Stories” showcases this well, with Zander’s melodies feeling at home in the song, giving it more of an emotional resonance.

There is one sticking point on the album, however, and it’s the duet between Englund and Dream Theatre’s James LaBrie on “The Beholder.” The pair never really gels, and their harmonies sound as if they’re in some sort of awkward war with each other. It’s not a deal breaker or anything, but it’s almost as if the song can’t contain two singers who tend to pour on the sauce the way Englund and LaBrie do when unleashed.

Other than that, though, Escape of the Phoenix is a satisfying listen, and manages to impress even more on its second half. Evergrey settles into a groove on songs like “Eternal Nocturnal,” “You From You,” and the title track, evoking satisfying memories on earlier career high points like “Ambassador” or “A Touch of Blessing.” It’s the creative headspace that’s always made Evergrey one of progressive metal’s most exciting acts, and it’s nice to hear them back in such strong form. ~ George Pacheco