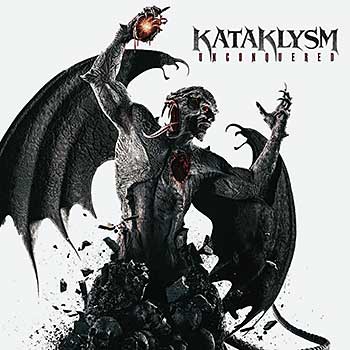 MELODIC DEATH METAL: For almost three decades, French-Canadian melodic death metal squad Kataklysm has delivered its uncompromising brand of metal. On its 14th full-length album, Unconquered, Kataklysm has dipped a bit into its brutal past while moving toward a more modern sound.

On its nine ferocious tracks, vocalist Maurizio Iacono, guitarist JF Dagenais, bassist Stéphane Barbe, and drummer Oli Beaudoin—who was just recently replaced by James Payne—have focused on a varied dynamic with a whole bevy of new elements and textures unleashed within the band’s sound. Although loaded with aggression and intensity, there’s something slightly different with this album.

Perhaps the seven stringed, almost djenty, downtuned guitar tone and heavy bottom end has a little bit to due with a noticeable core-ish vibe and modern feel that hasn’t really appeared on any previous Kataklysm album before. This album possesses a heavier and more robust sound, especially compared to last album, 2018’s Meditations. Of course, the vintage vocals from Maurizio are as vicious as ever here.

Album opener “The Killshot” proves to be one of Kataklysm’s heaviest tracks in recent years, reminiscent of the band’s 2000s era, while “Defiant” is the fastest track on the record, with an almost blasting death/black metal sound, recalling the band’s early hyper-blast days. Tracks such as “Cut Me Down,” “Underneath the Scars,” and “Focused to Destroy You” contain mid paced tempos with solid, groove based riffs. Most of the choruses are easy to grab a hold of, too, most notably on heavy bangers “Focused to Destroy You” and “Stitches.”

“Icarus Falling” is totally unexpected on a Kataklysm record with its melancholic classical keyboard intro, which is actually a welcome addition to the band’s cannon. However, it would’ve been better placed in the middle of the tracklisting instead of the next to last track, while album closer “When It’s Over” seems to be a good ending to the record.

The cover art by Blake Armstrong brings back to life the “Heart Beast,” which signifies bringing back the inner beast of Kataklysm, while the album was recorded and engineered by the band’s longtime producer and guitarist JF Dagenais, which has been a defining part of Kataklysm’s overall sound for several years. Mixing was handled by Colin Richardson and Chris Clancy, decorating it with a combination of the old school Kataklysm sound with a modern touch.

Kataklysm has been hit or miss with its fans over the last couple of albums, to say the least. However, with Unconquered, the band is back on track and is confident, consistent, and brutal once again. ~ Kelley Simms