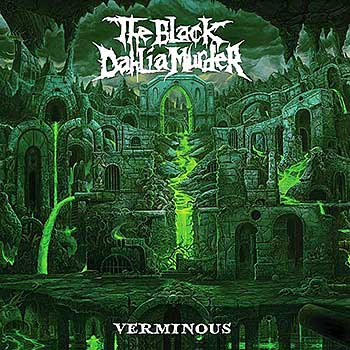 Verminous starts off strong with one of the best songs on the album, the title track. “Verminous” was released as a single, and it’s understandable why. You can hear the badass riffs and crazy drumming, and this song is unforgettable. That’s what fans of the band truly love about The Black Dahlia Murder—the songs are brutal but catchy enough to get stuck in your head.

The next track, “Godlessly,” is also sick, but the album loses steam at the third song, “Removal of the Oaken Stake.” The riffs are strong and catchy, but it’s not as menacing as The Black Dahlia Murder that most fans know. There’s a lot of melody, which isn’t a bad thing, but everything sounds the same in this song. Things pick up again with “Sunless Empire,” also of the best songs on the album—it’s catchy and completely merciless. The Black Dahlia Murder has one of its finest lineups now, specifically because of lead guitarist Brandon Ellis. “Sunless Empire” has one of his top solos on the album, and Ellis captures The Black Dahlia Murder crazy guitar style flawlessly.

“The Leather Apron’s Scorn” is also an interesting track, because it doesn’t sound like The Black Dahlia Murder at all—it’s very refreshing. This is the ninth Black Dahlia Murder album and respect must be given to bands that are able to change up their sound without sounding totally different. “The Leather Apron’s Scorn” starts off crunchy with spastic drumming and guitars. Even vocalist Trevor Strnad’s melodies are different than what we’re used to. As the song progresses, crazy drum fills and powerful bass parts mix it up, so the album is just not constant guitar shred. The next song, “How Very Dead,” is another unique track and a favorite on Verminous. This is The Black Dahlia Murder we know—ruthless, powerful, and chaotic. It’s brutal with the perfect amount of melody. The high-pitched guitars and stomping drums make this song a standout. Skipping to the last song, “Dawn of the Rats” is choppy and fast, but still sticks to the same sound of the album—it’s vicious and offers a little more oomph. The prelude “A Womb in Dark Chrysalis” also helps set the mood, and the combination of these two songs is a good way to end the album.

This might not be best The Black Dahlia Murder album to date, but it’s definitely one of their better albums of late, and all of the band’s fans should give it a listen. This album might grow on you with every spin, and fans might end up liking Verminous as much as the band’s earlier releases. ~ Stephanie Jensen