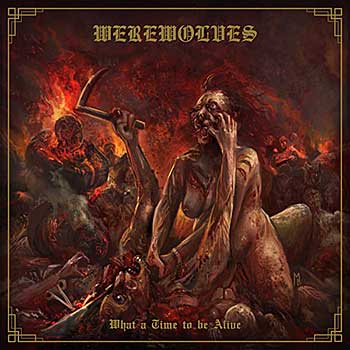 WEREWOLVES
What a Time to Be Alive

WARP SPEED BLACK/DEATH METAL: We’d be remiss if it wasn’t pointed out that the tagline “warp speed black/death metal” not only refers to the many musical sections of Werewolves’ second album that are indeed played at warp speed, but also the blip in time it took to create this album. The Dead are Screaming, Werewolves’ first album (released last year), was completed, from start to finish, in something like three weeks, with most of that time involving the wait for artwork, negotiating a deal with Prosthetic, and other behind-the-scenes odds and ends. The actual writing took guitarist Matt Wilcock (The Antichrist Imperium, The Berzerker, ex-Akercocke) and drummer Dave Haley (Psycroptic, Ruins, The Amenta) a weekend with bassist/vocalist Sam Bean (The Senseless, The Antichrist Imperium, The Berzerker) taking his sweet old time and delaying the record a week or so while he finished his parts. The philosophy was to write heavy songs designed to poke at the primordial parts of the brain so that lunkheads the world over would be scratching the tops of their heads and flinging feces at each other to a backdrop of no-thought blackened tech-death.

Following half of their Aussie homeland burning to a crisp and a bunch of COVID induced lockdowns, the trio literally took a few days away from their busy schedules of not playing live and not touring to sling together another openhanded haymaker of immediacy to cover shirts in drool, slaughter brain cells, and act as backdrop to a host of bad life decisions. In all actuality, as much as head lyrical instigator and interview liaison, Bean will strive to convince you Werewolves is the musical equivalent of a gorilla typing with its elbows, What a Time to Be Alive does possess a certain civility, even as its creators attempt to align with a less refined era when rank amateurism and inexperience gave the world a host of charming and classic albums from the 80s, back before the metal scene reached peak riff saturation and everybody meticulously planned their attempts at sounding like their influences.

That’s not to say this album taps into originality the same way it taps into unscripted recklessness. The nods to 90s death metal, nascent grindcore, and primitive black metal are raw and uncouth as your local homeless nutter screaming conspiracy theories on a busy street corner—and much more loveable and tolerable than the dipshits who do so in the name of QAnon and twice impeached loser Diaper Donnie Trump. But this time ‘round, things are tempered with enough sensibilities nabbed from elsewhere to keep this from being simply a retread of the debut. Power chord progressions reminiscent of gritty NYHC are spun into the mix on “Crushgasm,” while “Sublime Wartime Voyeurism” tempers machine gun black metal with machine gun thrash gallops and album closer “They Will Pay With Their Own Blood” sounds like a collision between the monolith of The Senseless and the sprinting of The Berzerker and presents as a lot more epic and thought out than the band will likely ever admit to.

Barreling forward with one’s first instinct can glean positive results, creatively and beyond. But not stopping to think can sometimes yield disaster. Not to say that there are an overwhelming number of spots on this album that are on par with diving headfirst into the shallow end, but there’s enough milquetoast familiarity to make for swaths of inessential listening, even if the ferocity and fury have been leveled up. The musical proficiency of the performers and the digital cleanliness of modern day recordings naturally draw Werewolves away from wavering tempos, ramshackle instrumentation, flubbed notes, and anything else that would contribute to a red lining on the seat of one’s pants experience. Still, enough sloped forehead waddling exists to make What a Time to Be Alive something to throw on when you feel like throwing things at other things. ~ Kevin Stewart-Panko