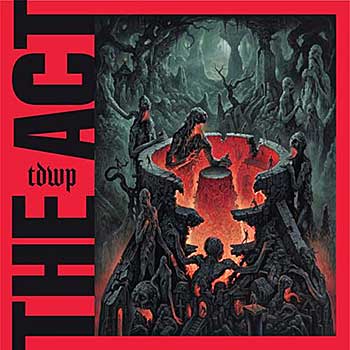 THE DEVIL WEARS PRADA
The Act

HEAVY AND REFRESHING: After you go to all the trouble of loftily announcing that your new album is going to “push the boundaries of your sound,” you’d be hard-pressed to follow up on such a substantial statement, right? Well, apparently not if you are The Devil Wears Prada, because that is exactly what they did on their latest album The Act.

Now, as a fan and as a listener, hearing a band you like say that they are going to “push the boundaries” could, and oftentimes should, give you pause. Again, this is The Devil Wears Prada. Don’t worry your pretty little head, because this band is still heavy as shit. They surely didn’t abandon their thump, with much of The Act registering just as high on the decibel scale as most anything they’ve done before (“Switchblade,” “The Thread,” “Spiderhead”). Better yet, a good way to think of The Act is as more of a refresh than a reset—a more or less sprucing up of their sound and taking it in a more rock-orientated direction not entirely unlike Bring Me the Horizon (“Chemical,” “Numb,” “Please Say No”). And before you rush to judgment, no, that’s not entirely a bad thing.

If you approach this album with the mindset of getting another With Roots Above and Branches Below or even another Plagues, you’re going to be upset. But listen, ask any band in existence and they will tell you that if you aren’t willing to adapt to the ever-changing musical climate, the industry will pass you by in a heartbeat. As already mentioned, The Act is a refresh of The Devil Wears Prada, as there is more than enough heaviness here to satiate longtime listeners and just enough nuance to entice new ones to jump on board. This is the best the band has sounded in years. ~ Brian Campbell