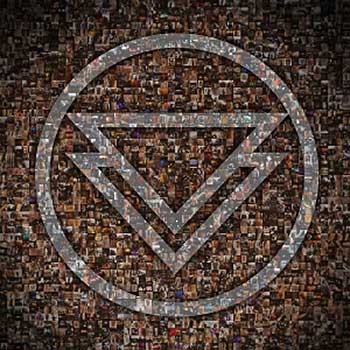 MODERN MELODIC HARDCORE: Everybody likes a good comeback story, and there are few as moving as that of Los Angeles melodic hardcore quintet The Ghost Inside. If you’re unfamiliar with the band’s history, they were four albums deep and on tour in the fall of 2015 when their tour bus was involved in a horrific accident with a semi-truck that claimed the lives of both drivers, the leg of their drummer Andrew Tkaczyk, and seriously injured vocalist Jonathan Vigil and guitarist Zach Johnson, as well as several others on the band’s bus. Their story since then has been one of struggle and recovery against the odds.

Now, five years later, The Ghost Inside is back with a new self-titled full-length reflecting on their tragedy and the time since then. To say this album evokes emotion is an understatement. What’s more, it’s everything one could’ve hoped for to follow 2014’s Dear Youth, and more. The lyrics on this record range from somber and heartbreaking to uplifting and hopeful. For a band with as much potential as The Ghost Inside had back in 2015, it would have been a shame to see their talent go to waste. Here on their new album, we finally get to hear that talent shine once again.

The band had released two singles ahead of the record’s release, the compelling track “Aftermath” and heavy number “Pressure Point.” Both tracks are fantastic, but the album as a whole has so much more to offer fans. From the defiant “Still Alive” and “One Choice” to straight-up mosh pit bangers “Make or Break” and “The Outcast,” everything that made The Ghost Inside a formidable band is amplified tenfold—the hooks are so catchy, the breakdowns are menacingly punishing. This material will absolutely destroy live.

There are definitely a few standout tracks aside from the singles released so far—chiefly the track “Begin Again,” which has some incredible vocal harmonies over Vigil’s growls in the chorus, and deals with his feelings of being in limbo after the accident, unable to move forward with music, unsure of what would happen. Another highlight of the record is “Unseen,” a song that sees Vigil exploring the aftermath on his mental health from the accident, asking himself if he is truly lucky to still be alive, when he’s left feeling broken emotionally from it. It’s a powerful song that really hits hard emotionally and sonically.

On this, the band’s fifth album, The Ghost Inside could’ve phoned it in and still would’ve done well with fans gobbling up whatever material they had to offer after five years away. Instead, the band delivers a powerful record that solidifies them as one of the most important modern bands in melodic hardcore and declares that they’re not going anywhere—The Ghost Inside is here to stay! ~ Nathan Katsiaficas