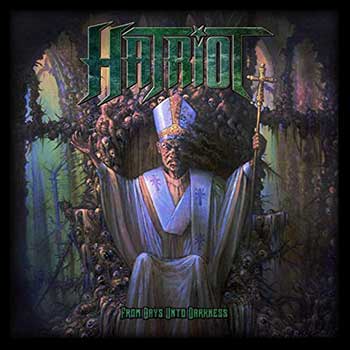 HATRIOT
From Days Unto Darkness

THRASH METAL, JUST LIKE DEAR OL’ DAD’S: If you mosey on over to Metal Archives and hit up the “Similar Artists” section on Hatriot’s page, what comes up are comparisons to, amongst others, Exodus and Testament. Given that Steve “Zetro” Sousa—he of Exodus and formerly of Testament—also fronted Hatriot from 2010-15 and given the lack of adventurous thought oft-expressed by Metal Archives’ most vociferous contributors, this shouldn’t come as any surprise. In this particular instance, however, those who chime in on the site’s Wiki-like modifications hit nail with hammer dead center. At the same time, however, how much can one chastise a band Zetro steered through the first five years of life for sounding like his other bands? Furthermore, how much can his sons, bassist/vocalist Cody and drummer Nick, be chastised for sounding like dad’s previous and present employers when chances are that’s what constituted a large part of their musical exposure during the formative years?

This is all to say that Hatriot sounds a lot like Testament and Exodus, though the majority of their third full-length leans towards the more abrasive approach of the latter, and ironically enough, Zetro’s current home. Generally speaking, the riff style dips heavily into the underrated classic that is Exodus’ Impact Is Imminent, as taut chord structures sling themselves amid percussive string pedaling and devilish sustain. Nick Souza has definitely studied the works of Tom Hunting, especially with how he peppers two-beats, the four-on-the-floor patterns, and his double bass flair, and his brother sounds so much like his pops it’s uncanny. We’re laughingly picturing the number of times Exodus guitarist Gary Holt called the Souza residence and found himself a couple minutes deep in a conversation with Cody before realizing he wasn’t talking to papa Steve!

“Frankenstein Must Die” has direct lines of influence to “Objection Overruled,” and the same thing can be said for the similarities between “In the Mind of the Mad” and “The Lunatic Parade.” And friends, the similarities aren’t just thematic. On the other hand, as much as From Days Until Darkness sounds similar to Exodus, that shouldn’t dismiss the album’s own inherent quality, as there are some killer sounding riffs to dive into. Ironically, if not expectedly, what little identity is created for Hatriot comes from the fingers of guitarists Kosta Varvatakis and Justin Sakogawa, whose excellent leads combine phrasing, feel, and technique and act as mini-songs themselves and provide the rare points where Exodus isn’t referenced so obviously. ~ Kevin Stewart-Panko