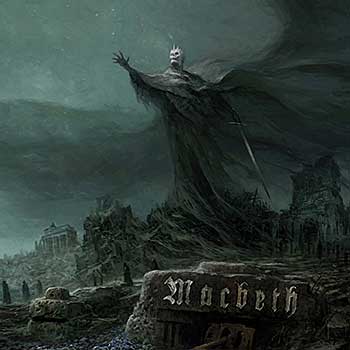 CLASSIC TEUTONIC METAL: The backstory of Germany’s Macbeth is a tale worthy of a documentary film designed to visually flesh out the book that should be written (assuming one hasn’t already been penned), detailing this band’s triumphs and tragedies. Macbeth was one of the first metal bands to exist in the former German Democratic Republic, recording a demo in 1985 before having their hand forced into a name change after the government banned its existence following an over-sold state sponsored and monitored gig in 1987 at which the authorities witnessed firsthand the band’s potential reach and impact on the youth of the day. Throughout 1987 and 1988, they were known as Caiman and managed two demos until disbanding in 1989 after the suicide of original frontman Detlev Wittenberg after spending a year in state prison. Taking advantage of the fall of the Berlin Wall, Macbeth returned for the first time in 1993, a reunion that was stopped in its tracks by the death of then drummer Rico Sauermann. 2002 saw another reconvening, and since then the band —including original members bassist Hanjo Papst and guitarist Ralf Klein—has been unstoppable, issuing a series of demos, EPs, live albums, videos, and full-lengths, with Gedankenwächter being studio album number five.

Macbeth’s game is fists in the air metal that straddles the world of boot stompin’ traditional plodding bangers and high-octane thrash. Given the band’s continued insistence of singing in their native tongue, it should come as no surprise that their inspirations are generally kept within Germany’s borders as well. A healthy dose of Accept and Grave Digger drives crunchy, midpaced tunes with choruses bordering on arena sized, like “In Seinem Namen” and “Wolfskinder,” and no one would be shocked if vocalist Oliver Hippauf revealed that a hobby of his is downing broken glass and razor blade shooters alongside Udo Dirkschneider.

When it comes to those moments like the title track and “Kreiger,” it’s all Kreator and Destruction precision and velocity aided by the crisp, incisive guitar tone spitting out thoughtful yet blazing riffs and solos. Unsurprisingly, when Macbeth steps out from under the black, red, and gold cues are taken from Metallica—probably one of the first American/Western bands that metalheads behind the Iron Curtain were first exposed to back in the day. That influence has been held close to heart as evidenced on “Brandstifter” and “Demnin,” two tightly wound ragers that both recall the faster and epic moments from …And Justice for All.

Gedankenwächter might not be the album that moves 21st Century metal forward in terms of innovation and originality, but it’s a solid display of the elements that make this music what it is and draws a sturdy line from roots to the modern era. And with a history that compelling, German based authors and/or documentarians should use this period of forced lockdown to look into somehow chronicling the Macbeth story. ~ Kevin Stewart-Panko