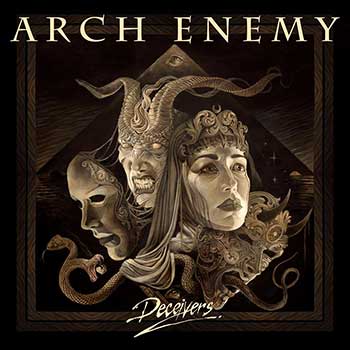 MELODIC DEATH METAL: Given the way of the world as of late, someone is probably planning to write a book about this mostly Swedish institution, if not already in the process of doing so. Thus, there’s no need for us to get into trying to recap the band’s history with the limited space allotted. But if anyone wanted a quick summary of present life in one of the biggest melodic death metal bands to have ever tread the boards, band leader, guitarist Michael Amott somewhat spells it out in the bio accompanying this, their 11th album, “I feel a responsibility to carry that heavy metal tradition. Some people might say it’s a formula, but I just think it’s songwriting! I’ve been at it for a long time now…but my focus has always been on the roots of heavy metal and hard rock songwriting. You’ve just got to tweak it and find little things that you haven’t done before, and we always find something new to do.”

Whatever tweaking the band has done on Deceivers will land differently with those who have done a deep dive into Arch Enemy’s discography versus those for whom crowd-pleasing melodic death metal remains on the periphery of their playlists. Either way, jaded and fresh ears alike should appreciate how “The Watcher” swings between a chorus that has Iron Maiden zip lining over Wacken’s open fields and a vicious galloping salute to the halcyon days of Teutonic thrash, whereas “Deceiver, Deceiver” rolls with the Kreator worship from front to back. Also worthy of across the board appreciation is the vibe on “House of Mirrors” as it twists a curious combination of 80s new wave, 90s rock, and NWOBHM around Arch Enemy’s standard linearity. However, the song’s potential—and many others—for making a definitive, all-around stamp is limited by Alissa White-Gluz’s rasp. Her vocals ride a straight line of monochrome throughout, failing to match the dynamics of this and the album’s more expansive moments like “Spreading Black Wings.” There are brief moments where her potential is uncorked, like in future gym rat anthem “One Last Time” and opener “Handshake with Hell,” though you’d think an experienced songwriter would have known the clean mid-section drop off would be a total momentum slayer.

“In the Eye of the Storm” and “Poisoned Arrow” both hail from the school of plodding mid-paced metal, sort of Judas Priest forced through Heartwork’s wringer and is only exciting if you haven’t heard the riffs a couple hundred times before. The suspicion, however, is that you have, especially if you own any of the band’s previous 10 records. On the other hand, of course, the guitar work is stellar, especially Amott and Jeff Loomis’ emotive leads and their combination of theoretical smarts and literate phrasing with metal’s drooling, unchecked id. And kudos to Arch Enemy for being one of the few bands to pump the bass up in the mix allowing the mood shifting throb of Sharlee D’Angelo to be heard on the likes of “Sunset over the Empire.”

So yeah, it’s Arch Enemy delivering as much novel meat to sink your teeth into while maintaining the status quo enough to keep the people happy who want the same thing over and again. ~ Kevin Stewart-Panko