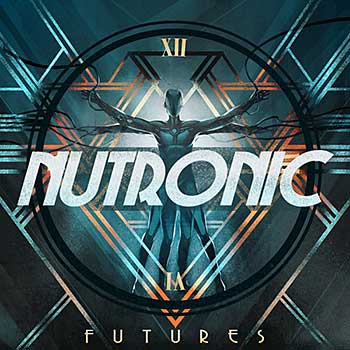 FUTURE SOUNDS: There’s something for everyone on Nutronic’s aptly named Futures, a record laced with futuristic sounds and upbeat dubstep funk with a heavy Pendulum-esque twist. The genre bending duo has been together since 2011, and what started out as an online project to mix vocals with dubstep and drum and bass quickly developed into something magical, as Jeremy Strickland (vocals/producer/songwriter) and Nick Dyson (guitars) formed Nutronic. Still operating virtually and across the oceans with Strickland based in the gulf coast and Dyson from Derbyshire, UK, the pair has put out multiple singles, EPs, and now this, their second full-length album via independent electronic rock label FiXT.

Full of energy and slick songwriting, the album is a sonic journey across 12 tracks showcasing the band’s ability to cross styles with ease and experiment. “Follow Me to the Other Side” echoes the call of opening track “Code War,” commanding listeners to take this journey into the unknown. With dirty synth riffs, a thumping heavy beat, and heart racing breaks, it’s an exciting start to a fast-paced album boasting a collection of showstoppers.

It’s clear there is a multitude of influences—dubstep, indie, drum and bass, prog rock, and metal. Title track “Futures” has a more traditional drum and bass sound with a laid back, almost haunting vibe. “Reconnect” picks things up with synth dance moments and sweet guitar licks. Guitar-driven and heavy “Destroyer” is a standout track that shows off their versatility, and the soaring, uplifting chorus of “Infodemic” is a force to be reckoned with, driving the song with menace.

“Kerberos” is dreamy, with the constant thwack of the snare rhythms keeping the tension. “There’s a new order coming” hum the beautiful vocals that blend perfectly with the guitar over the final section that adds to the atmospheric trance. Picking things up with “Empathy” immediately after, this is one of the heavier numbers and a real punch in the face. The metal influence is strong and wouldn’t be out of place next to Bring Me the Horizon.

Ending on the dramatic and eerie “Ocean in the Sky,” Nutronic is a band for the modern internet age. On Futures, they have found their footing, and with shows starting again, the prospect of hearing these tracks live is a thrilling one. ~ Becton Simpson