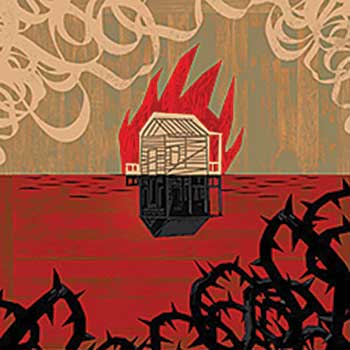 HOT WATER MUSIC
Light It Up

HONEST ROCK ‘N’ ROLL: Florida’s Hot Water Music doesn’t need to release an album of new material every year to remain relevant with its staunchly devoted fan base. Nope, the band doesn’t need to be that prolific at all. It’s been five years since Hot Water Music’s last album, Exister, yet this new collection of tunes on Light It Up sparkles with an energy so infectious, it seems as if no time has passed at all. There’s an honesty to the rock ‘n’ roll of Hot Water Music—a simple aggression earned from the band’s days of touring in the hardcore scene combined with a clear sense of songwriting intelligence. There is a high level of composition on Light It Up that makes the otherwise meat and potatoes riffs ‘n’ rhythms sound exponentially more dense and involved. Frontman Chuck Ragan’s ragged and gravelly voice is firmly in command here, while the guitar playing of Chris Woller is equal parts hard rock and punk rock, at times echoing the more progressive side of a band like Bad Religion. Hot Water Music doesn’t fit neatly into any metal or hardcore genre category, and this is a good thing. Instead, the band writes magnificent albums like Light It Up, a release bereft of trend or insincerity that is a breath of fresh air in 2017, as well as an essential, first day purchase for music fans. ~ George Pacheco