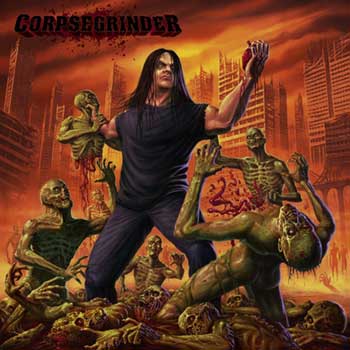 INDULGING A TERROR FETSH: The debut solo LP from Cannibal Corpse singer George “Corpsegrinder” Fisher clearly wears its musical influences on its proverbial sleeve. This is a Hatebreed and Terror inspired slice of death metal with a hefty helping of hardcore thrown in, for good measure.

When this amalgamation works, it works in spades, such as on the opening one-two punch of “Acid Vat” and “Bottom Dweller.” It’s short, (not so) sweet and to the point—a deathcore attack that dwells not on subtlety, but rather the intention on beating you to a bloody pulp. Fisher is in fine control of his vocals, as usual, but also dips in beyond his comfort zone by utilizing patterns that are a bit free and loose. It still sounds like Corpsegrinder, but he’s able to add a bit more personality, since the arrangements are wayless than complex than his main gig.

This isn’t to say that there aren’t dynamics to be found, of course, as the creepy opening melody to “Master of the Longest Night” succeeds in perking up the ears late in the album’s running time. Additionally, “On Wings of Carnage” beats down the listener with grooves that will likely get the pit moving, while still ensuring that Corpsegrinder the album is still very much death metal, through and through.

It’s not all blood red roses, though, as this album does drag a bit in the middle, and repeated listens don’t really do much in making Corpsegrinder feel like essential listening. It’s sort of like a case of diminishing returns. Sure, songs like “Crimson Proof” and “Death Is the Only Key” rage out the gate with breakdowns galore, but it lacks the required fire to bring listeners back again and again to the listening station. Instead, the tunes on Corpsegrinder feel more like an excuse to tour and fuck shit up, rather than any real musical statement.

And there’s nothing wrong with that. Corpsegrinder does its job and does it well. Just don’t go in expecting a scorched earth classic, keep your expectations low, and groove along for the ride. ~ George Pacheco