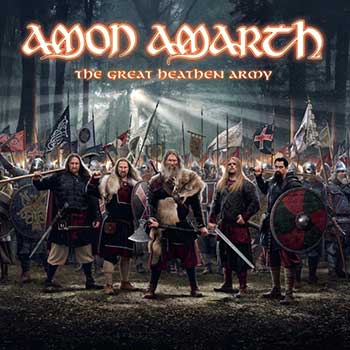 VIKING METAL: This particular analysis of the Swedish longboat pilots’ 12th full-length is going to take a bit of a different tack. Instead of the usual and automatic fawning of The Great Heathen Army that will be found in most places, this particular hack is barreling in from a different direction—as someone who would hardly be considered an Amon Amarth fan in the first place (ready yourself for a grip of annoying, journalism school offending, first person references too!). Their style of mid-paced, death metal lite has never really been my thing, but instead of making a big stink about my inability to connect with what happens to be one of the biggest bands in metal, I let them exist and do their thing while going on about my business. No biggie; it’s called live and let live, and far too many people have forgotten that can be a thing.

However, it must be noted that the few times I’ve witnessed Amon Amarth in the live arena since the turn of the century, they remain one of the very few bands able to improve the energy and upward trajectory of a performance as it clocks on. Almost invariably, they’ve hit the stage to a “meh” reaction, but have had me shifting my opinion to “pretty damn good” by mid-set and bubbling internally with proclamations of “this is fucking awesome!” by the time the proverbial curtain drops. Whether it was capturing the energy and boomeranging it back to the patrons of a small Toronto club a couple decades ago, watching head beard Johan Hegg laughingly swing drinking horns and cheesy (and rubbery!) prop weaponry around a festival stage in Texas, or paying witness to the massive longboat set up on an appropriately massive stage, Amon Amarth has always delivered live and in the flesh. But my ears can’t say the same for their recorded works. Maybe, in the same way the forward motion perseverance of their live shows has paid dividends, the 12th time will be the charm? Only one way to find out.

Not ever having done a deep dive into the Amon Amarth discography, it’s difficult to compare and contrast how The Great Heathen Army stacks up against previous works. Though, one thing becomes patently obvious from the off is that there’s no surprise this band is as huge as they are. In fact, it’d be more shocking if they weren’t headlining tours and festivals the world over given the ingredients of epic style riffing, refined melodic layers, heartbeat rhythmic pacing, and comprehensible vocal growl all massaged into an uncontroversial take on Viking history, itself often pushed towards anthems of empowerment and independence.

The Amon Amarth formula of two pronged minor key guitar pedaling/harmony driven by a solid, four-on-the-floor double-kick beat with Hegg’s bear hug voice locked into the higher half of the riff duel may be garden variety, but it works like a well oiled engine. The melodies powering “Get in the Ring,” “Find a Way or Make One,” and “Heidrun” are consonant and cogent in their presentation (and, in the latter, utterly waltzy/folksy) and stripped of frills in their delivery. Swedish death metal meets the classic days of Priest, Accept, and Maiden in the title track and “Saxons and Vikings,” which ironically features a Biff Byford/Hegg duet and bridges the gap between the stiff upper lip mainstream and the harder edges of this formerly pooh-pooh’ed subgenre. On the other end of that spectrum is “Skagul Rides with Me,” a track awash with guitars and toms mimicking the sound of battalions rumbling over hills and drummer Jocke Wallgren’s jazzing up of things with some nifty cymbal work. Appropriately—or unfortunately, depending on your stance—The Great Heathen Army seems to have a disarming sense of reservation at work, almost as if the band doesn’t want to lose too much control, devolve into the wild eyed sonic barbarians, and risk wiping away the currency of palatability they’ve built over the years. The thrashy gallop of “Dawn of Norsemen” comes across too antiseptic and clean, while “Oden Owns You All,” even though it’s probably the most uptempo composition, still presents as stilted, reserved, and lacking the fiery uncut fury normally inherent to death metal.

Either way, it’s difficult to imagine The Great Heathen Army not appealing to the great heathen army of Amon Amarth supporters that already exists in droves. There’s no doubt of the album’s melodic strength, populist appeal, authenticity, and even sense of humor (the goat sample in “Heidrun”). But under the gloss and glitz of prominence and justified PR machine hyperbole lies a sense of formulaic restraint that simultaneously explains the band’s mass allure but also why their recorded work continues to fail to click on a deeper level for the dude in the byline. Can’t wait to see them live again, though! ~ Kevin Stewart-Panko

CIRITH UNGOL: Half Past Human