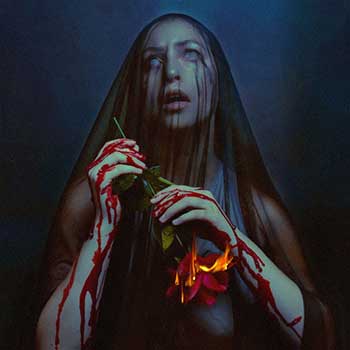 FIT FOR A KING
The Hell We Create

MELODIC METALCORE: Trauma and tragedy follow us from one event or person, passing down to those that experience the same pain. Like a disease, it attacks and takes hold of a person, unable to move forward. As difficult as it may be to move past the struggles that ail us, in the end, we are never truly trapped in our misery. Being trapped is an illusion, and we can always break the cycle and possibly end them. While 2019’s Dark Skies demonstrated that the Texas based metalcore band was capable of visiting the deepest parts of depression, anxiety, politics, and religion, The Hell We Create focuses on vocalist Ryan Kirby’s trauma for over two years.

While going through studio time for the new record, Kirby’s wife suffered a stroke that nearly took her life and adopting children who had a past that affected them greatly since childhood. The Hell We Create exchanges these stories intimately. The idea of death bleeding into reality, the prospect of losing his wife because of it, and the trauma these children experienced from an abusive family.

The explosive introductory track, “The Hell We Create,” opens the door to the frontman staring down darkness for the rest of the album. Intermingling with rapid-fire guitar riffs and impactful double bass drums, the emotional ferocity and polished execution of “The Hell We Create” puts the record in a good space for what’s to come.

The thickly melodic riffed section from “(End) The Other Side” keeps the pace going. Fit for a King’s mastery of moving storytelling is demonstrated by their strong percussion cadence, ardent tenacity of Kirby’s voice, straightforward poetic lyricism, and cinematic mood without surrendering their instrumental individuality.

From there, “Sink Below” dominates like a freight train with super-charged guitar lines and continuity of bellicism that courses through into titanic juncture “Reaper.” Hitting the jugular with some of the most massively aggressive instrumental energies on the record, “Reaper” resonates like no other on The Hell We Create.

Other noteworthy works include the sharply insightful “Eyes Roll Back” and the agonizingly illuminating “Fracture,” which demonstrate why the metalcore band is still among the best in the business.

With two songs that cut deep with finality, “Reaching Out” and “What You Left Behind,” the album effectively comes to a close. Fit for a King symbolizes that being vulnerable is a strength and not a weakness when it comes to dealing with the personal anguish we keep buried deep within of us. They make you feel every ounce of emotional strain and suffering centered into two very stunning concluding moments.

While this may not be the album everyone was necessarily looking for from Fit for a King, after a few listens, many might realize that this is the record they’ve been waiting for. This record’s outstanding instrumental and atmospheric soundscapes, together with its unquestionable lyrical vulnerability, make it well worth listening to. It’s clear that Fit for a King gave this experience their all, not to please others, but rather to bravely reveal a side of themselves that they had not previously displayed. For these reasons, The Hell We Create is their best effort to date. ~ Sammie Starr