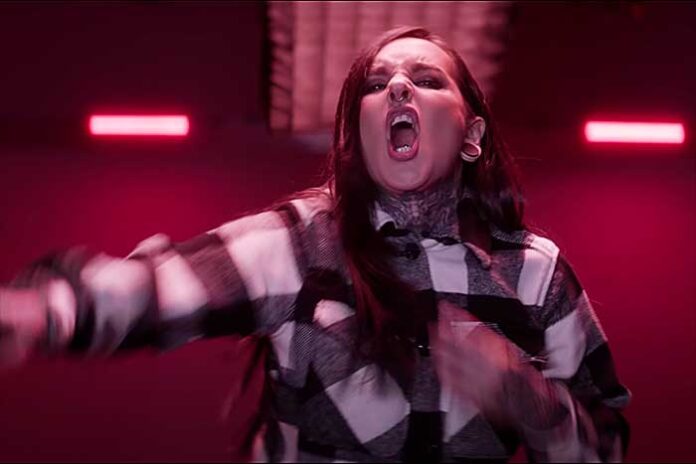 Amid their lively and groundbreaking touring schedule in support of Wallflowers – which saw the band embark on a European tour with Hypno5e and Napalm Records colleagues Space Of Variations, and their current nearly sold out North American headline tour with Suicide Silence and All Hail The Yeti – JINJER pushed their limits and shot a massive music video for the album track “Disclosure!”

With a fiery opening, “Disclosure!” cuts sharp like a razor blade without making any compromises. Distorted guitars, multifarious drums and an interplay of invading screeches and deep growls unfold the full power of the chart-topping title. The video verges on a visually played mind game, which seems almost cinematically intimidating, transmitting the feeling of strength across the screen.

JINJER bassist Eugene states:
“The track ‘Disclosure!’ and the video itself is a very important video for JINJER. Not only is it one of our favorite tracks on the new album as well as live, our ex-guitarist Dmitriy Oksen stars in the video and was great to work with him again, even if it’s in a different capacity now.”

Gothabilly Supergroup THE 69 CATS Releases New Video for Cover of...

WITHIN TEMPTATION Are Here to “Entertain You”