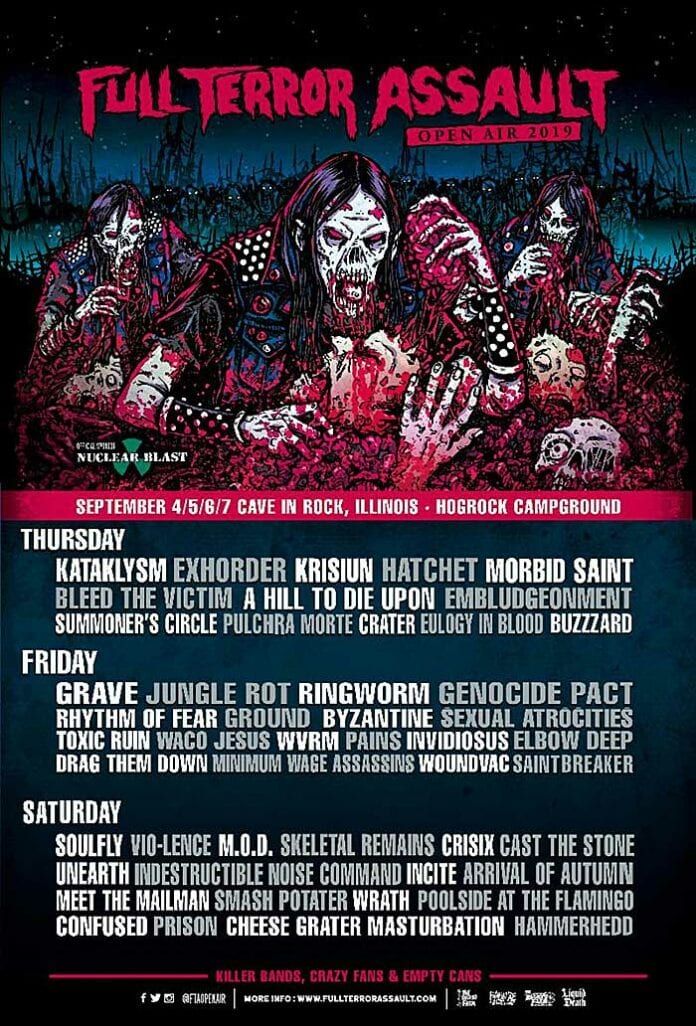 Full Terror Assault Open Air Festival – the first true European-style open air festival for extreme music fans in the U.S. – has announced the daily lineups for each of the festival’s three performance days.

The festival will take place September 4, 5, 6 and 7, 2019 at Cave In Rock, IL’s Hogrock Campground, where fans will experience two days of pre-parties and activities, plus two more days of non-stop blistering sets from the best bands in underground extreme music of all kinds. Special sale ticket pricing will be available until August 26, after which tickets will return to regular retail prices.

Phil Demmel Vio-lence says, “So jacked to be coming to the Full Terror Assault fest to fully assault all of you fuckers!!! Been a long time since we raged in Illinois and we’re ready to bring it! Are you?”

Additionally, Full Terror Assault has announced Crisix, Meet the Mailman, Smash Potaterand Through N Through as the artists playing the festival’s Thursday night pre-party at the Cobra Lounge in Chicago.

“One of the main goals of Full Terror Assault is to showcase the underground metal scene,”the Full Terror Assault team says. “Our Chicago pre-party is just another way for us to do that. The lineup is a combination of bands playing the festival, as well as some underground favorites who are not playing the festival. This year we have Spanish thrashers Crisix for their first ever U.S. show, the Canadian heavy metal band Meet the Mailman for their first Chicago show, and the locals Smash Potater and Through N Through. So come out, support and discover the next generation of metal!”