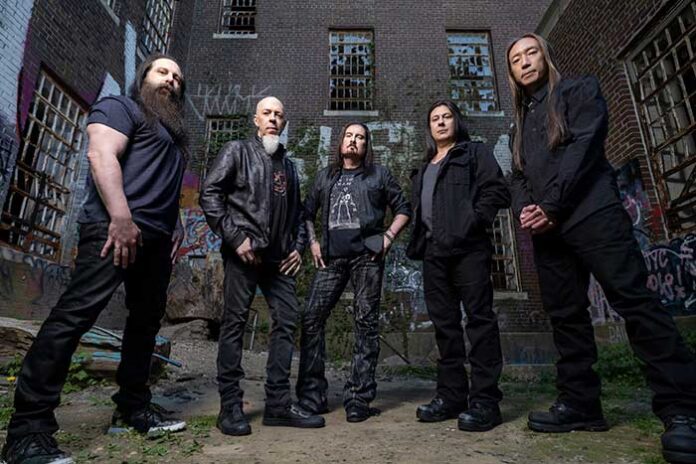 After 35-plus years, New York progressive metal titans Dream Theater usually doesn’t disappoint its fans with each album released. The band’s breakthrough moment happened with its 1992 release, Images and Words, featuring the game changing hit track “Pull Me Under.”

However, on its 2016 bombastic conceptual album, The Astonishing, the band’s fan base was divided by its drawn out compositions and exhaustive storyline. On its 15th full-length optimistically titled album, A View from the Top of the World (released on October 22, 2021 via InsideOut Music), the talented quintet is sure to win back those fans that dismissed The Astonishing. Expanding on the sound Dream Theater helped create, the band also retained its roots of the elements that have garnered them worldwide devoted fans.

A View from the Top of the World contains the familiar Dream Theater formula that the band has been known for since its 1985 inception. Vocalist James LaBrie, guitarist John Petrucci, bassist John Myung, keyboardist Jordan Rudess, and drummer Mike Mangini create proggy soundscapes on the album’s seven expansive tracks, including the epic 20-plus minute closer and title track.

A View from the Top of the World begins with the explosive opener and first single, “The Alien,” possessing a cosmic sci-fi vibe with lyrics about interstellar travel and extraterrestrial exploration. With a dazzling display of musicianship, the lyrics are easily relatable and should resonate with longtime Dream Theater listeners.

“My son, Chance, told me to listen to this Joe Rogan podcast, and he had on the show Elon Musk,” LaBrie explained the inspiration for the subject matter during a recent Zoom chat. “The whole podcast was about interplanetary travel, because that’s what Elon Musk is about—terraforming Mars and eventually going out beyond Mars and terraforming planets that will sustain humanity. The only way that we are going to survive as a species is that if we can somehow inhabit other planets and make them something that will support life as we know it.”

After his initial inspiration, LaBrie jotted down some key points from the podcast episode that he felt would set him up in writing a cool sci-fi song with poignant lyrics.

“I wanted it to be able to resonate with everyone, everybody being able to relate to it,” LaBrie confessed. “Especially nowadays where we see the planet becoming extremely overpopulated to a certain degree and the environment is paying the ultimate price because of it. When you hear somebody talking about that, maybe we should start looking beyond this planet. Because at some point, it won’t be able to support who and what we are, which is one of the lines in that lyric, too. We need to expand our sense of reality, our sense of purpose, and our sense of being.”

The accompanying video for the track is also an epic visual experience. Created and directed by digital artist Wayne Joyner, the footage perfectly ties the music together with the storyline and the lyrics.

“Wayne Joiner does a lot of our animated footage. He’s done the stock footage and the virtual footage that we’ve used in our last tours,” LaBrie said. “A lot of the direction for that video was coming from him and John Petrucci talking. Wayne hit me up, ‘James, can you give me a literal interpretation of what you were talking about for this song?’ So, I threw a big Word doc at him on where I’m coming from and what I’d like him to touch upon in the video. From there the dialogue continued between him and John Petrucci. Wayne is so incredibly talented and he gets things right away. His work is brilliant. It’s extremely identifiable.”

The album sounds like 100 percent Dream Theater. However, every new Dream Theater album brings heavy scrutiny amongst its fans and music critics. Was it a conscious effort from the band to steer away from past formulas and tread onto a different path?

“The formula doesn’t change for us,” LaBrie admitted. “We started discussing what we wanted to do, or where we thought we should go with this album. And what really sets the motion and what was the catalyst is knowing that we wanted to create an epic track with no time constraints. With this one, it was 20 minutes-plus. When you know that you’re going to write a song of that nature, it sets up the rest of the album. We also knew that with the rest of the album, we didn’t want to put time constraints on any of those songs. Once we get into a room, there’s so many ideas and there’s that conversation of where we want to go.”

After the initial conversations from the band on the direction of the album, piecing together the musical compositions came next.

“Once the instruments are picked up, John Petrucci and Jordan are throwing ideas back and forth at warp speed,” LaBrie said. “Then Mike Mangini is fully involved, and he has been for the last two albums as far as the compositions. John Myung is there like he always has been, and then I’m there throwing my stuff in and out. So, it happens for a reason. With this album, we knew we wanted to get back to the roots. Let’s get back to the moments in our past that really enamored our fans, whether it be some of the moments from Awake [1994], Scenes from a Memory [1999], or Six Degrees [2002]. That doesn’t become the literal interpretation for the new music, but that becomes somewhat of a subconscious inspiration. You take in those moments and you make it sound cohesive and seamless to maintain the identity, but make it sound like it’s fresh, new, and contemporary, without copycatting.”

Due to the Coronavirus pandemic that plagued most of 2020/21, the writing and recording process for A View from the Top of the World proved to be a different experience compared to previous albums. With LaBrie quarantined and forced to stay in Canada while the rest of the band were in New York at their new state of the art recording studio—Dream Theater Headquarters (DTHQ)—LaBrie was interacting through Zoom via studio monitors.

“I was pumped into the Dream Theater studio via a big monitor and coming through their headphones and vice versa,” he said. “They were pumped into my headphones at the studio here at my house, on the big monitor screen I have here, and then my studio speakers. To a certain degree, it put me in a more advantageous position. Because anytime I had an idea, or those guys were working out sections, I could mute them, and then sing into my mic what I was feeling, whether it be a melody, a riff, or anything like that I could sing down. There were certain advantages to me being in my own studio and being able to control the environment completely. It’s funny how things took on a different face, but it had its advantages for sure.”

“THERE WERE CERTAIN ADVANTAGES TO ME BEING IN MY OWN STUDIO AND BEING ABLE TO CONTROL THE ENVIRONMENT COMPLETELY.”

At DTHQ where A View from the Top of the World was recorded—also where Petrucci recorded his latest solo album Terminal Velocity—the facility includes the recording studio, control room, engineer room, and a huge warehouse where all of their equipment and stage gear is stored. It also contains a conference room, a living room, TV room, a kitchen, and a maintenance room to fix the equipment. As LaBrie puts it, “It’s our own little world, our little microcosm.”

“Thank God that we did have something like that, because during the pandemic it would just be the band in there and nobody else,” he said. “We used it to do all the rehearsals before we went out on Distance Over Time [2019]. We can also use it for getting ready for any rehearsals or tours that might be coming up. It really provides everything that a band like us needs. Any band would love to have this. It would be extremely productive for any band to have this kind of a setup so that it’s at your beck and call anytime you want it. It’s an amazing situation for us.”

A View from the Top of the World was produced by Petrucci, with engineering and additional production by James “Jimmy T” Meslin and mixed and mastered by famed producer and current Judas Priest guitarist Andy Sneap.

“Andy had mixed John’s last solo album, so John mentioned to the rest of us that he had this guy, Andy Sneap, and he was thinking that this is our guy to mix our next album. So, we sat down and listened to his solo album and sure enough, the production and the sonic value of it speaks for itself. We were all in agreement. Not only that, Andy Sneap is an amazing musician as well. He has the ears, he understands a band like us, and being in Judas Priest, he would know that as a musician what to listen for. John Petrucci produced it. He has been producing several of our albums. And he has a clear picture of where he wants it to come from and where he wants it to ultimately end up sounding sonically. I think it sounds brilliant. Each instrument is heard for what it’s worth. There’s a great balance on there, everything is being heard, and there’s nothing being obstructed. There’s nothing being buried or lost in the mix. And I think, especially on the last two albums with Ben Gross and Andy Sneap, these albums are defined to a certain degree from the sonic value. Just the whole production is amazing.”

“FROM THE BEGINNING OF FEBRUARY AND PROBABLY FOR THE NEXT YEAR AND A HALF THEREAFTER, WE’LL BE OUT TOURING AROUND THE WORLD.”

Since Dream Theater’s Distance Over Time tour was cut short in 2020 because of Covid-19, the band is itching to get back on the road and play these new songs to a live audience.