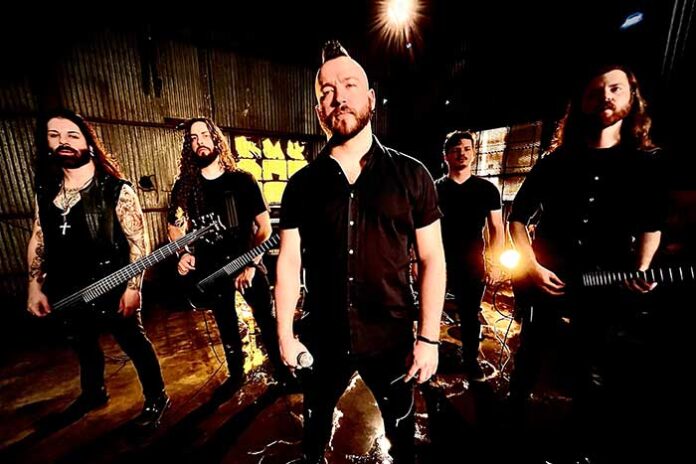 WATCH THE EXCLUSIVE PREMIERE OF THE NEW SINGLE AND VIDEO “DOWN” FROM THE NOCTURNAL AFFAIR ONLY ON OUTBURN.COM

The Nocturnal Affair’s new single “Down” marks the band’s first official release via Earache Records, one of the longest running and most well-known rock and metal record labels in the world.

The band’s musical style is an ode to darker alternative music torchbearers like Type O Negative, HIM, David Bowie, Gary Numan, and Nine Inch Nails. They capture a uniquely haunting sound steeped in melancholic melodies enveloped in the darkness behind the glow of the Las Vegas lights where Brendan Shane has called home.

“The writing of ‘Down’ was a bit of a turning point for this band. I had been writing a lot of slow, brooding stuff and I was weary of change due to the poor influence of someone I was doing business with. ‘Down’ helped me come out of my shell and realize that this project can be whatever I want it to be and I can write whatever I feel is right.” – Brendan Shane, vocalist

“Down” is from the band’s upcoming debut album (META)MORPHOSIS), set for an early 2022 release. The album was produced by John Moyer (Disturbed) and mixed and mastered by Logan Mader (Machine Head, Once Human), who also contributed to some of the songwriting and production.

Moyer weighs in on his work on the album and single, saying, “‘Down’ was one of the first demos I heard that sparked the beginning of our work on the album. ‘Down’ is about some rough times and I am sure a lot of people can relate to it.” Mader also comments, “The Nocturnal Affair are one of my all time favorite bands to work with. ‘Down’ is the first of many hard hitting singles to come. This band is on fire!”

The group has performed alongside a wide array of artists from heavy metal heavyweights like HELLYEAH, Asking Alexandria, and Pop Evil, as well as industrial rockers My Life With The Thrill Kill Kult and has toured with the vampiric act The 69 Eyes.

The Nocturnal Affair were recently invited to perform on Chris Jericho’s Rock ‘N’ Wrestling Rager at Sea Cruise, which sailed from Miami to Grand Bahama Island this past October. This appearance marked the band‘s first live performance since the COVID-19 pandemic shut the world down in early 2020.