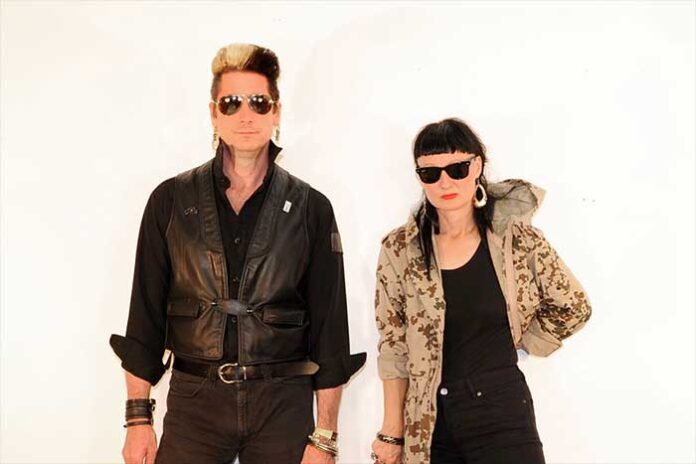 After a quarter century of nearly nonstop activity, dystopian Detroit synth-punk institution ADULT. has perfected a strain of stylistic cohesion in the album format, “but for this we wanted something that’s falling apart.” Becoming Undone, the ninth official full-length by co-founders Nicola Kuperus and Adam Lee Miller, explicitly succeeds in this aim, simultaneously rejecting and reflecting the planetary discord that inspired it.

Written between November 2020 and April 2021, the album might be ADULT.’s most non-conformant yet. There’s plenty of dance bangers, but ultimately the album is riddled with impermanence, loss and looping dissatisfactions.

Today they’ve revealed lead single “Fools (We Are…)”. The twitchy EBM track is paired with a self-created video that was birthed from an idea to combine Kuperus’s recurring performance of this clown/fool theme and a series of drawings that Miller had always wanted to realize into a sculptural installation—the Golden Fountains. The two reveal, “Inspiration came from performances by Paul McCarthy’s ‘Painter’ to Bruce Nauman’s ‘Clown Torture.’ The sculptural work of Duchamp’s ‘Fountain’ to Robert Gober’s ‘Two urinals (in 2 parts),’ and the album artwork of Fad Gadget’s ‘Incontinent.’ The toilet is a universal motif, a shared human situation or in some cases shituation. We are all fools in one way or another, from war to waste to societal trends in ridiculous human behavior.”