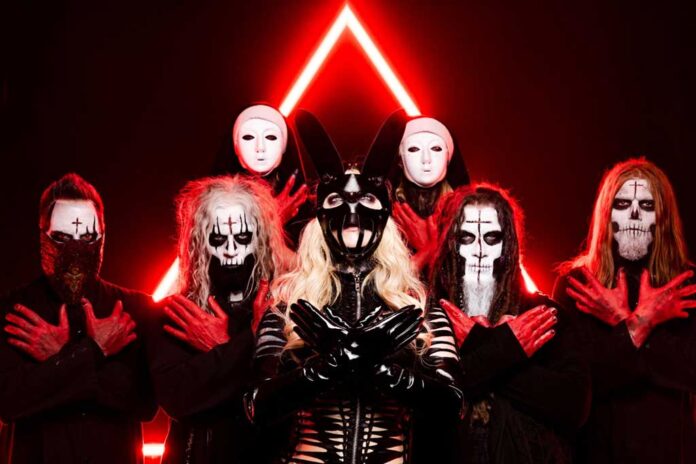 Today, GRAMMY® Award-nominated hard rock outfit In This Moment releases their Blood 1983 EP, commemorating the 10 year anniversary of the band’s Gold certified album Blood (2012). The EP is now available digitally and D2C only via BMG and the band’s webstore.

“We are excited to celebrate the 10th Anniversary of our album Blood by bringing this new EP to life. Blood changed our lives and shifted our career in a way we will never forget,” says Maria Brink. “We created this reimagined version because we wanted to give our beautiful fans something to be excited about. Blood 1983 is just that…we can’t wait for the world to hear it.”

The EP was co-produced by Tyler Bates and Dan Haigh and mixed by Zakk Cervini. “The collab between In This Moment, the inimitable Dan Haigh of GUNSHIP, and myself yielded an awesome reimagining of four of the band’s classic songs, leaning into synthwave and industrial music that has inspired all of us throughout our careers in music. We love it!” – Tyler Bates

“Injecting some John Carpenter style horror synth and a spatter of haunting 80s atmosphere into these reimaginings of In This Moment’s already otherworldly creations was ludicrous fun. Working in collaboration with the band and film soundtrack guru Tyler Bates was an absolute joy. Shut your eyes, and enjoy the descent into the smoke filled neon abyss…” – Dan Haigh

DEAD TO A DYING WORLD to Release Elegy Through Profound Lore...

THE BLACK DAHLIA MURDER to Kick Off US Tour Next Week,...