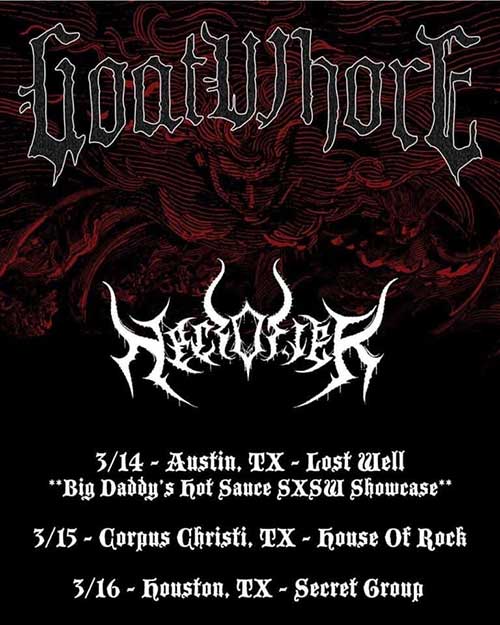 GOATWHORE will kick off a Texas mini tour this week surrounding their unofficial SXSW performance on Thursday. Presented by Big Daddy’s Hot Sauce, the Blood For The Master showcase will take place at The Lost Well on March 14th and includes performances by Necrofier, Destroyer Of Light, Witchcryer, and more. From there, the band will quake stages in Corpus Christi and Houston with additional shows, including slots on Brews & Bruise Fest in Chesterfield Township, Michigan and Austin Terror Fest in Austin, Texas, booked for the coming weeks. See all confirmed dates below.

GOATWHORE is currently penning the follow-up to their critically-adored Vengeful Ascension full-length. Released in 2017 via Metal Blade Records, Vengeful Ascension is the band’s seventh full-length and highest charting album to date ranking in at #4 on Billboard’s Heatseeker Chart, #6 on the Hard Rock Sales Chart, #11 on the Independent Chart, #16 on the Hard Rock Chart, #18 on the Rock Sales Chart, #49 on the Top 200 Current Albums Chart, and #59 on the Top 200 Chart upon its first week of release.