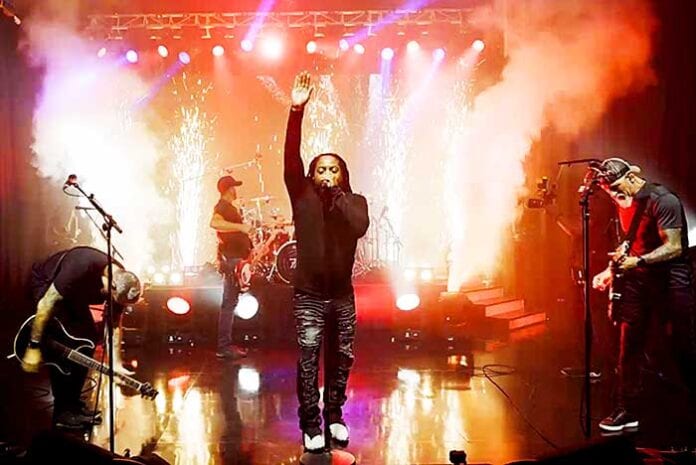 Through these unprecedented times, bands have had to get creative with their projects. Besides drive-in concerts, one of the most popular ways that bands are allowed to play shows is through streaming live events, which have become the norm these days and will probably stay that way for a while with the uncertainty of the ongoing pandemic.

On Friday, October 23, Sevendust presented Live In Your Living Room streaming event, hosted by NoCap Live, LLC., to celebrate the release of its 13th full-length album, Blood & Stone. The alt-metal/hard rock quintet hit the stage in an Orlando, Florida facility and proceeded to kick ass with passion and emotion for an hour long set that included a good mix of their back catalog and newer tunes from Blood & Stone. On this night, vocalist Lajon Witherspoon, guitarists Clint Lowery and John Connolly, bassist Vince Hornsby, and drummer Morgan Rose were in perfect form.

The show started right on time with an intro from the host NoCap, showing an interview with Lajon dedicated to the 7D Family then showing an album by album flashback through the years. Going live at 9:04 p.m. EST, the overall mix of the instruments and vocals sounded great, while the multi-camera angles flashed spontaneously between each band member. Kicking off the set with “Dying to Live” from its new record was the most obvious choice to open the show with, as the band was in perfect unison with each other. LJ’s vocals faltered slightly in the second song, “Denial,” but by the time follow-up track Splinter” was performed, the band really started to hit their stride with flying colors. “Waffle” from 1999’s Home was up next with its melodic buildup, while LJ was spot-on vocally. It was great to hear some friendly laughs and banter between the band at the song’s conclusion, as well as when the band launched into their Soundgarden cover “The Day I Tried to Live” (which was flawless), as LJ jokingly asked someone for a smoke, proving that the band were obviously having a good time.

During “Pieces” from their Next album, the background vocals from Rose were amazing, not to mention his energetic drumming throughout the whole concert. Heavy hitter “Till Death” from 2013’s Black Out the Sun, with its frantic rhythmic pace, stepped things up a bit, while “Blood from a Stone,” one of the most catchiest tracks from the new album and “Angel’s Son” from Animosity, including a soulful vocal performance from LJ, proved to be one of several highlights throughout the evening. However, “Black,” from the band’s self-titled debut, had a slight misstep with an abrupt ending. The fantastic vocal interplay of “Praise,” the soaring opening vocal harmonies of “Bitch,” and the finale of “Face to Face” from 2003’s Seasons was a fantastic triple threat conclusion to the evening’s festivities.

As far as live streaming events go, Sevendust: Live In Your Living Room was an energetic show with a moderately big stage production consisting of various backdrops, flashing screen patterns, a dizzying light show, stage fog, and sparkling pyrotechnics. The band’s repertoire was a good balance of their back catalog along with two new tracks and the Soundgarden cover from the new record.

Single tickets are $17 with the stream available to watch after the initial airing as many times as the viewer would like for at least 48 hours. Plus, the band is offering some brand new merchandise including slick T-shirt offers limited to this show only.