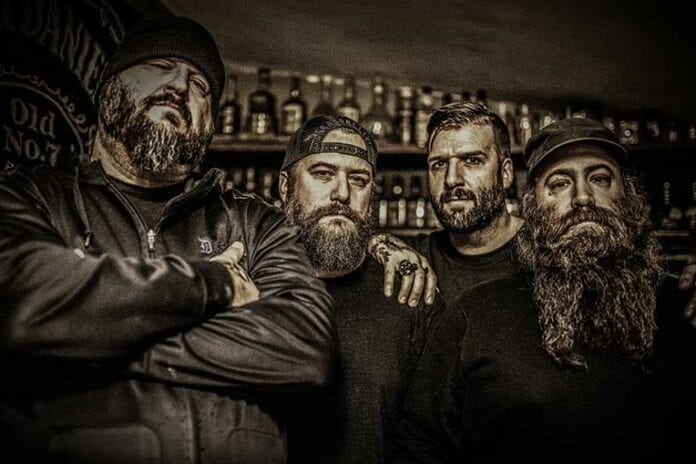 Angry, defiant, and aggressive. That’s what you get when you spin New York hardcore/metal hybrid heavyweights Brick by Brick’s sixth album Hive Mentality. Released on February 22 via Upstate Records, the nine pit slamming tunes, including a revamped song featuring The Acacia Strain’s Vincent Bennett and brutal covers of Skid Row’s “Slave to the Grind” and Motörhead’s “Iron Fist,” are unabashedly simple yet effective metal songs with a hardcore attitude.

Featuring guitarist Mike Valente, bassist Andy Parsons, vocalist Ray Mazzola, and drummer James Muller, Brick by Brick has built a modest yet solid reputation within the modern hardcore/metal scene for a decade and a half now. In 2004, Valente owned a local neighborhood bar in Troy, New York, and one night over a couple of beers with a few friends bullshitting about music, they mutually agreed to start a band. The drummer at the time worked at construction and aptly penned the band name. Thus, Brick by Brick was born.

“We were all from Troy at the time, so we kind of adopted the Troycore moniker,” Valente says during a recent phone interview. “We didn’t do a whole lot of touring or playing out of town so much because everybody was tied down with either family or jobs. Now I’m the only original member and the only one from Troy, so we had to lose the Troycore moniker. We’re having a blast, doors are opening, and we’re walking through them instead of choosing another door or shutting it.”

It’s hard to believe that the band has been around for this long and are still slugging it out. Brick by Brick may be one of the hardest working bands out there with a staunch DIY approach. I believe you handle all of the band’s promotion, press, booking shows, and day-to-day operations.
I do everything. I don’t want to say I’m a control freak, but I know what I like to do, and right now the band members just say, “Yes.” I just want to make sure everybody’s cool with it, so we can get the time off. As with before, I would get my singer’s schedule, and with his work he would be able to do one week but not the next, and then not the following month. So, we wouldn’t get to play for two months because of work or whatever. So, now everybody’s on the same page. It’s just easier that way. I work full-time as well. I have to duck and weave around work and life and all that stuff, too. We’re grownups. We’re not kids anymore.

Speaking of growing up, you’re in your late 40s, Ray’s in his early 40s, and Andy and James are in their 30s. Although you’re not young bucks anymore, you’re forging ahead on your own terms.
We were playing shows before Facebook and before the internet and GPS or any of it. I remember doing tours with a pocketful of quarters and a map. Technology has made it way easier for bands to get around and get noticed, and to be more DIY and have more control over who hears or who sees what you’re doing. Before it was you had to kiss ass to play the right club or be on the right show. And you actually had to go to shows in order to get the word out about your show. I don’t see a lot of kids promoting DIY like we used to do. I mean, I still go out and hand out fliers at shows. I think the generation that’s happening now is missing a lot of the social interaction part of being in the music community. We’re older, we’re never going to be a hype band. Kids probably think we’re a bunch of dads playing hardcore. It’s fun for us. I like meeting people and going to the next show and meeting a new group of people and hanging out. We don’t hole up in the dressing room or van, we’re out there yakking it up with whoever. I like being around people.

Hardcore usually gets a bad rap as being violent. Do you see much violence in the current hardcore scene?
This music’s always been aggressive. The hardcore scene these days, the way I see it, is more family orientated than any other scene. For example, once a year we do a toy drive with The Acacia Strain. In the past 10 years we’ve done eight toy drives. And these kids are showing up with 10 or 15 toys, and not just one little cheap toy you can buy at a dollar store. Kids are bringing in bikes and cool stuff. I think hardcore gets a bad rap just because of the aggressive music, but that’s an outlet. These shows are an outlet for these kids, and you can’t take that away. There might be a little fight here and there, but they’re not out doing stupid shit or robbing liquor stores. They’re all in one place, they have a common ground. It’s violent music, but I think it’s for the good of the whole.

“IT’S MORE METAL BASED WITH HARDCORE IN THERE. TO ME, IT’S ALL AGGRESSIVE AND ANGST FILLED STILL.”

Has the band’s musical sound changed over the years?
I’ve always came from a metal background, and I’ve always loved hardcore. My musical tastes when I write, I write what I’m listening to at that point in time. There’s always been elements of thrash and metal in our hardcore based songs. Now that we’re getting older, I think it’s more metal based with hardcore in there. To me, it’s all aggressive and angst filled still. The Troycore moniker, all those bands are crossover, they’re all more metal based than the punk hardcore stuff. The Albany style was a more pro hardcore movement. Then you got New York hardcore, which pretty much started it all, traditional hardcore crossover with punk. So, we don’t have as much punk elements as we do hardcore. I think all the stuff we’ve ever written has always been metal that always had hardcore and crossover in it. I think we’ve changed more to a metal aspect once Ray came into the fold because he came from Full Blown Chaos. In that he has more of a guttural growl to him while the last singer had more of a bark to him. That changed a little bit, but as far as me writing, I was influenced a lot on this record by Power Trip, Municipal Waste, and Iron Reagan.

How did you convince The Acacia Strain’s Vincent Bennett, Municipal Waste/Iron Reagan vocalist Tony Foresta, and Jessica Pimentel to guest on the album?
Vincent from Acacia Strain has done a numerous amount of shows with us throughout the years, and we became really good friends with those dudes. We actually did that song about six years ago on a split with a band called Ruckus out of California. There was only I think 250 of them printed, and the song was dedicated to the split alone. So, whoever bought those records, it’s out of print and they never printed anymore. So, I wanted to redo that song because now we got Ray, and it was a fun song to play. I called Vincent up, and he said absolutely, no question about it. And he came into the studio the day he got back from a tour to record that. We’ve known Tony for a few years now by booking shows, and we’ve played with Municipal Waste a couple of times. And again, I just asked. The song he sings on, “Bar’s Open,” is inspired by Municipal Waste, by watching their videos—their videos are insane. It gave me a party atmosphere to write with, and that’s the song we came up with and he was the first person we thought of. Then there’s Jessica Pimentel. She sings in a metal band called Alekhine’s Gun from Brooklyn. She’s an actress on the Netflix show Orange Is the New Black. I’ve known her for a few years, and our bands have played together in the past. It’s an angry song, and there’s a rant in the middle and I wanted somebody who was angry and had some angst behind them. And if you knew her, she’s got a Brooklyn attitude and she’s got something to say. We didn’t write the songs specifically for them, but once that song hits the fold, I could see Jessica singing the part. I could see Tony singing the part, I could see Vincent, which we wrote with him in mind back in the day. We didn’t have to have a second choice.

What gave you the idea to do covers of Skid Row’s “Slave to the Grind” and Motörhead’s “Iron Fist?”
They were just fun. With “Slave to the Grind” by Skid Row, we’re a little bit older than the people who are in our genre right now, and I remember seeing Skid Row with Pantera in the early 90s. Just as you get older, you see that these guys are badass. That song’s heavy to begin with I think. It was one of those guilty pleasures. “Iron Fist” by Motörhead, I felt we had to put a Motörhead tune on there just simply because that classic lineup is gone. It makes you realize, you think, “Damn, Lemmy’s dead.” It’s crazy. I never thought that day would come.

What’s next for Brick by Brick?
In the immediate future, we’re going to be doing the Rebellion tour in Europe with Madball and Iron Reagan in a few weeks. The distant future? There’s no plans. We’re not setting our calendars to certain things. We don’t have to do certain tours or play a certain amount. We do it at our own pace and keep it fun. Once it stops being fun, then we won’t do it anymore. We just go out and fucking rage!

ESCAPE THE FATE: Fate and Legacy