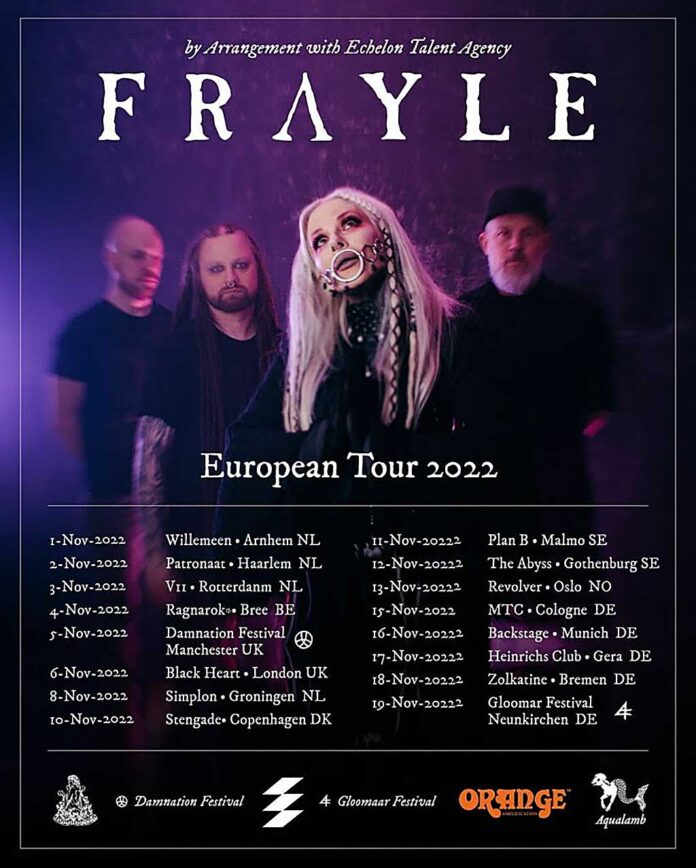 Frayle drops Skin & Sorrow today. The album was fully written and recorded by Bilovecky and Strang from the third floor of their own studio, on the edge of Cleveland, surrounded by ancient lakes and woods that echo the howls of coyotes. The band is rounded out live by Jason Knotek on bass and Jon Vinson on drums.

The record follows Frayle’s groundbreaking debut 1692 in 2020 that further introduced the world to their penchant for creating “lullabies over chaos.” Tracks feature Strang’s ambient vocals laid over the voluminous instrumentals of Bilovecky (formerly of Disengage), morphing into disturbing harmonies best described as music for the night sky and are poised to dominate the doom circuit.

In addition to haunting original tracks that push heavy music into new dimensions (an inspirational mix of Sleep and Portishead, or Black Sabbath and Bjork), the duo is known for their cryptic covers including takes on Johnny Cash’s “Ring Of Fire” and Bauhaus’ “Bela Lugosi’s Dead.”

Skin & Sorrow is now available on Aqualamb Records’ website with turquoise and violet vinyl variants. As well as CD, digital, and a lush 160-page interactive book filled with photography, artwork, lyrics, and ephemera that document Frayle and their creative process. Europe-only vinyl variants are available via Lay Bare Recordings.

LORD OF THE LOST Releases New Video for Cover of Iron...