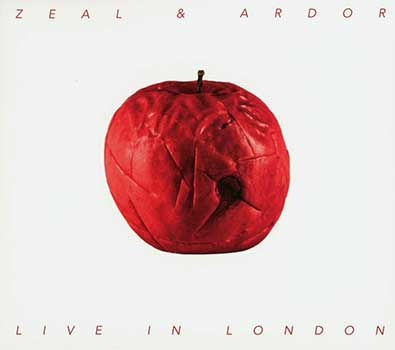 Live & Flawless: Armed with only a single full-length album, Stranger Fruit, and an EP, Devil Is Fine, the genre defying blues, soul, and black metal band Zeal & Ardor has a new live album not only featuring almost their entire catalog of songs from both releases but also four songs that have not yet been officially released. Only recently procuring a full lineup for performances and tours, some of the live renditions of the songs have a much different feel than their recorded counterparts. The biggest difference can be heard in earlier songs like “Blood in the River,” “Devil Is Fine,” and the smoldering slow burn of “In Ashes,” which sound much fuller and heavier live. “Ship on Fire” sums up the biggest difference between their recorded versus live performance, with the layered haunting chants of all three vocalists throughout the song, and the mid song breakdown with Manuel Gagneux singing over the chants shows that not only does the song translate on stage, but the band has found the perfect way to perform it on stage.

While the instrumental electronic Zeal & Ardor songs, which Manuel refers to as “palette cleansers”, are all cut from the album, it provides room for the four incredible unreleased songs. “We Never Fall,” a song that fits perfectly within the Stranger Fruit realm, blends chant, soul, and builds up to the scathing faster paced black metal parts the band has become known for. “Hold Your Head Low” starts as more of a slow blues driven song unlike anything that’s been heard from the band before but also transitions seamlessly to and from black metal. On the opposite end of the spectrum, “Cut Me” is much more of a fast paced black metal guitar driven song—one of the fastest songs on the record. Lastly (both in unreleased material and last song of the record) is “Baphomet,” which was originally released as a single in 2017 by Adult Swim, easily the heaviest song in the set and has been their closer that certainly commands movement from the audience.

Rather than listing the other songs this album includes, it’s easier to note the only two songs that aren’t here. “What Is a Killer Like You Gonna Do Here?” from Devil Is Fine and “Waste” from Stranger Fruit. Missing only two songs of an entire discography is incredibly impressive, and the four unreleased songs more than make up for it.

While the sound of live albums can sometimes lack, that isn’t the case here, as Live in London sounds full and immersive with each instrument and all vocals clear and leveled perfectly so you don’t miss a single note or inflection in any riff or chant. The sound is due in part to a flawless performance but also to Kurt Ballou for a great mix and Alan Douches for an excellent job mastering.

Zeal & Ardor is a band that is equally amazing on record as they are live, and while the recording here certainly captures why, it’s imperative to catch them on stage. They are an incredible band visually, so a video release of this recording in the future to give everyone the full experience of how powerful a live Zeal & Ardor performance is would be perfect. Nothing will beat witnessing them first hand, however, but that being said, Live in London is an outstanding live album. Clocking in with 22 tracks and 80 minutes of music, this is truly a gift to fans of the band as well as an excellent comprehensive introduction to anyone who is not well versed with this quickly rising band. Including almost every song they’ve ever released as well as a few they haven’t, Live in London will not only be an integral addition to the Zeal & Ardor library, but also a great bridge from Stranger Fruit to whatever is next for this extraordinary band. ~ Jeremy Saffer