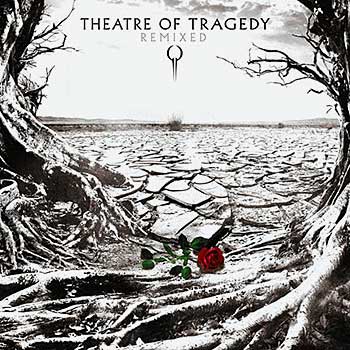 MINUS THE METAL: Theatre of Tragedy split up in 2010, but as far back as 2000’s Musique, the Norwegians had already mostly abandoned their gothic metal roots for a more electronic based sound. However, even when they were frontrunners of the prom dress metal scene with 1996’s Velvet Darkness They Fear and 1998’s Aégis, they would issue EPs and singles that often featured dancey remixes and interpretations of their naturally lush and voluptuous style. Remixed shockingly compiles, well, um, remixes of tracks from as far back as Velvet Darkness They Fear and includes four new reinterpretations exclusive to this release.

With contributions spawning mostly from the German and Norwegian dance/electronica/techno scene like VNV Nation, Das Ich, Icon of Coil, Conetik, Funker Vogt, Zeromancer, and Siva Six, the results are far, far removed from the source material. Guitars are greatly excised, rhythm patterns are altered to fit under the fluorescent kaleidoscopic lights of a heaving rave, with the element that survives relatively unscathed being the ethereal vocals of original frontwoman Liv Kristine Espenæs and her replacement from 2004 onward, Nell Sigland.

It must be noted that aside from Tommy Olsson’s remix of “Deadland,” just about every track here is re-imagined for the dance floor. Some of them are more upbeat and have me feeling like I’ve somehow ended up in a leather bar being cruised by a gathering of horny power bottoms, while others do a pretty good imitation of the early 90s when Front 242, Nitzer Ebb, and Meat Beat Manifesto were at their popularity apexes in America and being invited to the Lollapalooza main stage. Other times, I just want to crawl under a black light and slit my wrists, if not my eardrums. ~ Kevin Stewart-Panko